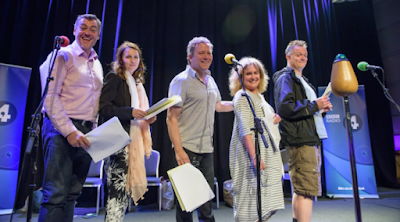 According to the comedy website Chortle, Laurence Howarth, the script writer for Radio 4's Dead Ringers, has conceded (a) that his show may have an inherent anti-Brexit bias [you don't say!], (b) that it does more jokes against Brexit than for it [well, know me down with the late Sir Ken's tickling stick!], and (c) that it has a writers’ room that's "intrinsically partisan" because it has more than its fair share of "typically London-centred, broadly left-wing people", who were also predominantly Remain voters [who'd have guessed?!]...

...but it's all OK really because, being conscious of this inherent, intrinsic bias, they can counteract it, and, "overall", the show doesn't have a point of view, and "a natural balance" emerges between and during sketches. (So there you go: there's nothing to worry about after all!)

And why does Lawrence think there are there more jokes against Brexit than for it? Because "that’s what’s happening" and because "the ones doing Brexit are in power".

Hmm. There's a huge effort to stop Brexit, and plenty of the 'stoppers' are also plum targets for satire. And even if we except his "the ones doing Brexit are in power" argument why exactly does that justify there being more anti-Brexit jokes than pro-Brexit ones? It possibly explains the people targeted for satire, but surely doesn't explain the preponderance of jokes against Brexit itself? Or am I missing something?

Anyhow, here's a joke: Took the shell off my racing snail this weekend. Thought it might speed him up. If anything, it made him more sluggish.
Posted by Craig at 15:01