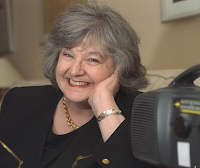 Monkey Brains wrote a little earlier: "I heard Gillian Reynolds, the grand dame of Radio reviewers on Desert Island Discs criticising the BBC for allowing politicised presenters to identify with certain political positions. The BBC can't dismiss her view can they? Well they can, but not so easily as with us plebs."

Well, here a transcript of that part of the discussion. I wonder exactly which BBC political presenters  she had in mind?


Kirsty Young: Let's talk a little bit Gillian Reynolds then, a little bit more, about the trade, the profession if you will, of the critic. You've described podcasts as "ready meals, dinners for one" - what a great little phrase! Could you just explain a bit of that? What do you mean?


Gillian Reynolds: I'm mildly resistant to the podcast because there are a lot of people now whose business it is to say, "This is the saving of audio". It's not the saving of audio. It's just audio branching out.
Kirsty Young: You did a podcast for a while at the Telegraph. Did you enjoy it?


Gillian Reynolds: We did a six-week thing. Nobody encouraged us, and they dropped without notice and without acknowledgement. But I am delighted to say that my co-presenter then, Pete Norton, is now head of podcasting at the Telegraph, so maybe their ideas are changing. Maybe I was slightly ahead of the wave.


Kirsty Young: I mean, they are hugely popular, aren't they? And people download podcasts in their tens of millions.
Gillian Reynolds: Tens of millions, yes. Worldwide too.


Kirsty Young: Yes indeed. And also people can say things that they wouldn't say in front of a live mike, that they wouldn't be allowed to make the edit on Radio 4. In a way that's kind of the joy of them. The stays are off, if you will.
Gillian Reynolds: The stays are off. Now, there are good things about that - people can talk about their anorexia or their sexual problems or their problems with their frightful mother and so on - that's really good. And it is a new forum, it's more personal and will find its own audience. The slightly dangerous thing I think for the BBC is that you've got political presenters who are meant to maintain steadfast independence of any political viewpoint occasionally seeming to nudge into one shade or opinion or another, and I think that's actually quite dangerous. And I think someone ought to have a serious think about it before they get too carried away.


Kirsty Young: Time for some music...