Long-term BBC watchers may recall the former Head of the BBC Multimedia Newsroom Mary Hockaday sending out an email to BBC staff in 2014: 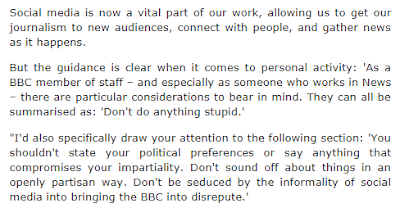 Helen Boaden, then Head of BBC News, had sent out something similar in 2010:

Do these emails from BBC high-ups come in four-year cycles? If so, we're due another this year - especially as more and more high-profile BBC journalists are saying things that brazenly compromise their impartiality.

For example, when I saw that Donald Trump had tweeted the following...

...I just knew that senior BBC US reporter Anthony Zurcher would "rush to communicate" his views on the matter on Twitter and tweet something that very sailed close to the wind, impartiality-wise. It turns out that I was actually only half-right. Anthony didn't just sail close to the wind, impartiality-wise, he crossed the line into outright sounding-off:

He sounds angry, doesn't he?.

The current Head of BBC News is Fran Unsworth. How long will it be before she sends out that email again?
Posted by Craig at 17:47