Is the BBC biased against Jeremy Corbyn? 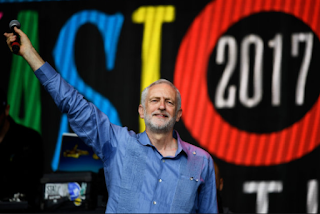 'Is the BBC biased against Jeremy Corbyn?' was the questioned asked by Roger Bolton on today's Feedback in the light of a three-part Radio 4 series called The Long March of Jeremy Corbyn.

We heard from four listeners:


So plenty of praise there, including for the programme's impartiality, but also complaints of bias from both sides of the Labour divide - which cancelled each other out in true 'complaints from both sides' fashion. (Very nice for the BBC).

The overall effect (accidental? deliberate in the juxtaposition of self-cancelling voices?) was to make this programme sound as if it actually might have been impartial (as least as far as Labour's factions go).

What followed was an interview with Steve Richards, transcribed below. It too had the effect of making it seem that The Long March of Jeremy Corbyn is a particularly fine piece of impartial BBC broadcasting (as least as far as Labour's factions go).

But what of the BBC as a whole?

Steve says the BBC failed to grasp the significance of Jeremy Corbyn to begin with. It underestimated him. Only the 2017 election changed that.

That seems true to me, though Brexit has probably had something to do with the fluctuations in the BBC's attitude to him too.

Steve also says that the BBC has been excellent at giving voice to the range of Corbyn supporters, thus changing the political debate....

....which is an interesting idea.

It's an idea that could easily (and mischievously) find itself recast to parody a familiar line of argument from the likes of Samira Ahmed & Co. about Nigel Farage and his (in)famous 31 appearances on Question Time: By so heavily platforming voices from the far-left, the BBC is guilty of normalising them.

I have to say though that I'm personally entirely comfortable with hearing the broadest range of views possible, and don't begrudge Owen, Ellie Mae, Rachel, former Newsnight Paul, Kerry-Anne & Co. their generous season tickets to appear on the BBC in the slightest. The more the merrier I say.

Roger Bolton (a man with a left-wing past) then pursued a fascinating line of argument over how the Left has been accustomed to seeing the BBC as a bulwark to balance out the right-wing press.

I think there's something in that too.

By implication, that's surely also why the further reaches of them are now so constantly angry at the BBC for not being sufficiently enthusiastic about/reverential towards oooh Jeremy Corbyn.

And that's surely why the likes of (far-left) Media Lens - very early, lonely pioneers of this kind of left-wing BBC-bashing - have always singled the BBC out, along with the Guardian and the Independent, for especially intense criticism. They seem to see them as 'traitors' - a soggy, left-liberal 'centre ground' constantly letting the Left down by not being even more biased in their direction than they already are.

(The newer crowd, however, appear more likely to unthinkingly accuse the BBC of being 'Tories' or 'right-wing', being less grounded in intellectual politics than those old-school Media Lens activist types.)

And something similar might well explain the remarkable Lord Adonis/Alastair Campbell double act and their stupendous campaign against the BBC's pro-Brexit (sic) bias.

Roger Bolton has cracked it!

Anyhow, that's more than enough of that. Here's the transcript:

ROGER BOLTON: The series has three different presenters. The first programme was presented by the political journalist Steve Richards, who two years ago was the man behind a previous series called simply The Corbyn Story. I asked him why he felt now was a good time for another programme.

STEVE RICHARDS: I made a series of three programmes about Jeremy Corbyn at the end of his first year as Labour leader, and it seemed to me that at the end of the first year since the general election there was an equally compelling case to re-visit Jeremy Corbyn. It seems to me he is still living through the most extraordinary story in British politics since 1945 - the rise of this figure who had been on the backbenches now established as a leader after that election, which I consider to be a success for him even though he lost. And so, he is just fascinating and I wanted to follow through that curiosity for a second time.

ROGER BOLTON: There's a lot of suspicion of though the BBC - not necessarily of you. A lot of emails to us talk about you being extraordinarily fair-minded - but that's not the BBC. I mean there are emails like, "I see the BBC has a whole series now of Corbyn-bashing", "hatchet job drivel dressed up as a documentary show", etc, etc. So there's a great suspicion. Do you think on the whole that the media have been, and the BBC has been, fair to Corbyn?

STEVE RICHARDS: Well, it depends what you mean by 'fair'. I think at the beginning all media outlets, including the BBC, struggled to quite recognise the significance. That was up until the general election. I think he was viewed in the media through the prism of 'this is all gonna be heading for disaster'. I think since the election there has been a greater understanding of his significance. And the BBC now - and this I think is a healthy thing and one of the consequences of Corbyn - are very good actually at putting up a range of voices who are close supporters of his, and that has changed the political dialogue on the media.  Not surprisingly it did take time.

STEVE RICHARDS: Well, certainly those who thought my programme was biased against Jeremy Corbyn should listen to it again. I mean, the majority of contributions...Because we were trying to understand him you have to speak to those who are close to him and, therefore, the majority of the contributions were from people trying to shed light on him from a quite sympathetic perspective. But, you're right. The role of the BBC is not counter the Daily Mail. The role of the BBC is to be  balanced and, therefore, you have to include other points of view as as a matter of duty. But also it would be an inaccurate picture to present the current situation within the Labour Party as some sort of harmonious paradise. I mean, that would be wrong. So the BBC has duties of impartiality that are well known but you also got to tell the story as it is in reality.

ROGER BOLTON: Do you prefer making these sort of documentaries to doing straight interviews, in the sense that a lot of our listeners say a lot of political interviewing has become 'bang bang', 'yes, no', 'polarised positions'? Do you prefer though gradual exposition and exploration of ideas?

STEVE RICHARDS: I love doing considered political journalism, at a time when politics is so fast-moving, but I think the interviewing is also...I agree with some of those listeners who think it's too much of a sort of shootout at the O.K. Corral style of political interviewing. And I wish in some ways that the interviews we did for the series could be put on a website or something because the interviews themselves, I think, are quite interesting, because if you just have a conversation with these people they engage with you...

ROGER BOLTON:  But don't you think there's an additional problem here? That those who were operating from outside what was the political consensus need more time to have their ideas expressed or exposed?

STEVE RICHARDS: I completely agree. And they need to be tested over time. And you have to get through all the cliches about, you know, 'back in the 1970s', you know, in the context of, say, that Corbyn programme. It's much more complicated and interesting than that. And that does take time and it needs space, And, if you've got three minutes you just say to Corbyn or McDonnell, 'You know, so you want to take us back to 1970 with nationalisation?', they'll say 'No, no, we're not. We want to do this, this and this', and it's over. So, yeah. I haven't thought about it like that before but the old consensus was familiar terrain for the interview and the listener, and this is all new, and it needs space.

ROGER BOLTON: Our thanks to Steve Richards.