"...and that would not preserve the BBC's impartiality"

I can't see the word "fair" or "unfair" anywhere in Lord Hall's reply to Conservative MP Rehman Chishti - and yet the words "fair" and "unfair" are the very ones which are doing the rounds and causing the BBC some problems (see, for example, the comments threads below the Times and Telegraph articles). [I know. Your heart must be bleeding for them too].

What the BBC Director-General actually wrote is that the word Da'esh is "a pejorative name" coined by Islamic State's enemies ["including Assad supporters and other opponents in Syria"] and that if the BBC were to start using this term it "may give the impression of support for those who coined it and that would not preserve the BBC's impartiality".

In other words, Tony Hall doesn't want the BBC to be seen as supporting "Assad supporters and other [IS] opponents in Syria" by using their "pejorative name" for Islamic State.

That is not quite the same as saying that the BBC wants to be "fair" to IS, is it?

That said, adopting Lord Hall's own logic, doesn't using the name IS calls itself, i.e. "Islamic State", also risk giving "the impression of support for those who coined it" and fail to "preserve the BBC's impartiality" too?

Has he thought his position through? (Or am I missing something?)

The Telegraph has posted the letter in its entirety: 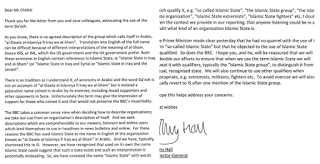 So you may read for yourselves what Lord Hall wrote:

Thank you for the letter from you and your colleagues, advocating the use of the term Da'esh.

There is no tradition as I understand it, of acronyms in Arabic and the word Da'esh is not an acronym of "al-Dawla al-Islamiya fi Iraq wa al-Sham" but is instead a pejorative name coined in Arabic by its enemies, including Assad supporters and other opponents in Syria. Unfortunately this term may give the impression of support for those who coined it and that would not preserve the BBC's impartiality.

The Prime Minister made clear yesterday that he had no quarrel with the use of the term "so-called Islamic State" but that he objected to the use of Islamic State unqualified. So does the BBC. I hope you, and he, will be reassured that we will redouble our efforts to ensure that when we use the term Islamic State we will caveat it with qualifiers, typically the "Islamic State group", to distinguish it from an actual, recognised state. We will also continue to use other qualifiers when appropriate, e.g. extremists, militants, fighters, etc. To avoid overuse we will also usually revert to IS after one mention of the Islamic State group.

I hope this helps address your concerns.

Here's a potential solution to the BBC's problem.

Maybe, to truly "preserve the BBC's impartiality" the BBC should take a leaf out of its own coverage of the 'spare room subsidy'/'bedroom tax' (or, going back in time, the 'community charge'/'poll tax'), and start regularly using formulations such as "Islamic State, also called Daesh", or "the self-styled Islamic State, also known as Daesh". That way every bunch of murderous thugs and fanatics in the Syrian conflict would be treated to full-blown BBC impartiality and Lord Hall could rest easy in his bed.

After all, we wouldn't want the BBC to be "unfair" to Assad supporters and IS's Islamist rivals, would we? (Would we even be able to sleep at night?)
Posted by Craig at 10:16