These days people like to believe they’re speaking out courageously. They’re telling truths that others dare not tell, saying the unsayable and boldly articulating what no man has articulated before.

Anyway that’s what Bishop Tom Butler seemed to be trying to do on Today’s Thought for the Day. He had an anecdote for us about preventing extremism, which contained a knowing message, which I took to be:  All religions have nasty, violent and vengeful bits, and before true openness and interfaith understanding can be achieved these unpalatable passages need to be brought out into the open, and preferably rejected or at least adapted to fit civilised society. And Bob’s your uncle. Extremism tackled. 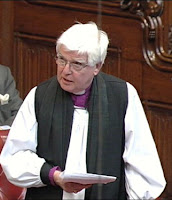 However, the anecdote he proceeded to deliver did not cite or specify the nasty, vengeful, racist bits in the Quran. You know, those parts which  inspire the particular ‘extremism’  that’s causing all the current difficulties.

No. Bishop Butler must have thought we weren’t ready to hear any of that; perhaps he wasn’t quite ready to say it.  Instead he used an analogy. Don’t bother to rack your brains any further, his tale concerned a Jewish rabbi.
At some interfaith gathering or other, the particular party game they were playing required all the multi-faith religious leaders to read out an uplifting verse from their own particular sacred scriptures.  But the rabbi was ill, so he had kindly sent his chosen verses (from psalm137) to be read out.


“There was a stunned silence. Later I met the rabbi and asked him why ever did you choose that lamentable psalm?”

continued Bishop Butler, getting into his stride, and recounting the rabbi's reply as follows:

“All our scriptures have difficult and even scandalous passages, and we won’t make real progress in interfaith relationships until we have the courage to discuss those with one another”

The Bishop followed this with what he undoubtedly intended as his TFTD message, although one might speculate that several unintended messages had already been delivered.

“As a Christian it made me think of the leader of the Jonestown community who, before they committed mass suicide, was fond of quoting to the Christian followers of his extremist sect the words from St. Luke’s gospel. “Whoever does not hate father and mother wife and children, brothers and sisters cannot be my disciple.”
It’s commonly said that people committing atrocities are not real members of the faith they’re dying for or killing for, but that’s certainly not their own understanding. They’re feeding on certain verses on their sacred scriptures or events in their faith history, which encourage them to act in extreme or even violent ways. Well the truth is that any world faith doesn’t have a single colour to its understanding of God and the world. It’s a spectrum of colours.”

Get it? Jews and Christians are potentially violent extremists too. We’ve all got an inner suicide bomber, and it’s still in there somewhere, just waiting to be ignited.

“That’s why it’s difficult to put our finger on real Christianity or real Islam or real Judy-ism, or even real Britishness” 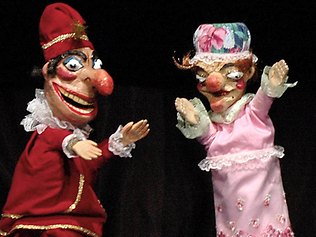 It amuses me when people say ‘Judy-ism’. Punch and Judy are indeed a violent couple. Islam is Punchism, then. Islam is Mr. Punch to the Jews’ Judy. That’s the way to do it.

I see what Bishop Butler is doing here. He wants us to believe that Christians and Jews are inherently as hate-filled and vengeful as (so-called) Islamic State. There but for the grace of progress and civilisation, go we all.

But Bishop, Muslims are not the new Jews. Let’s call a spade a spade. No more moral equivalence. If you must besmirch Jews by bandying about colourful passages from the Hebrew Bible, or if you want to distance yourself from the bad bits in your own sacred verses by citing examples from extreme Christian sects, then go ahead. Be open, why don’t you.


Most of all, if you want to be seen as a plain speaker don’t beat about the bush.  If you want to say that it’s high time Muslims brought their religion into the 21st century, just say so.
Posted by sue at 14:44