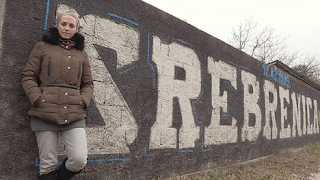 BBC One is broadcasting a documentary on Monday about the Bosnian War entitled A Deadly Warning: Srebrenica Revisited.

It will be presented by a leading British Muslim convert, Myriam François-Cerrah - a familiar face on the BBC's The Big Questions and Sunday Morning Live.

Will it be a balanced account that, as well as detailing the massacres committed by the Serbs and Croats and the suffering of Bosnia's Muslim population, also mentions (a) the role of foreign jihadis in fighting on behalf of Bosnia's Muslims, marking - some believe - the real starting point of the whole modern ultra-violent jihadi phenomenon, (b) doesn't completely airbrush out the atrocities committed by the Bosniak side, and (c) mentions the West's military actions against Serbia on behalf of the Bosnian Muslims (and later the Kosovans)? Or will it be just another one-sided BBC programme?

Well, I have to say that the blurb on the programme's webpage doesn't look promising. Not only does it look as if it might be one-sided in its coverage of what happened in Bosnia, it appears as if it might also be used to further project a very familiar BBC message: a "warning" that anti-Muslim prejudice is a danger in "multicultural Britain today" too:

Journalist Myriam François-Cerrah travels to Bosnia to mark the 20th anniversary of one of the worst atrocities in Europe since World War II.

In July 1995, in the midst of war in the former Yugoslavia, around 8,000 Muslim men and teenage boys were massacred at Srebrenica. Now Myriam, a British Muslim, is visiting the site with a group of young people - all born in the year of the genocide. In an often emotional trip, they learn first-hand how easily prejudice can take hold and why this story has important lessons for us all in multicultural Britain today.

The BBC Media Centre's account adds that the daughter of Col. Bob Stewart will be going along too, as well as...

...medical student Abdul, who is astonished that he didn’t hear about the story in school. He wonders why, as he feels that “when Muslim people die you don’t learn about it as much.”

Hopefully, Myriam will correct Abdul over that, given that the BBC provided massive coverage of the atrocities against Bosnia's Muslims at the time - including Srebrenica. We wouldn't want such an unjustified grievance to be stoked by a BBC documentary, would we?

Talking of Myriam François-Cerrah, she was writing in the Telegraph yesterday in support of Sharia marriage in the UK.
Posted by Craig at 08:54