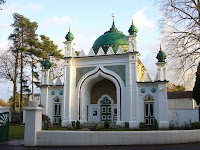 The BBC got into a spot of difficulty earlier this year over its attempts to put a positive spin on a BBC/ComRes survey in which 27% of British Muslims expressed  some sympathy with those who carried out the Charlie Hebdo massacre.

Such behaviour fuelled claims that the BBC is far from impartial in its reporting of such stories, that it actually pursues an agenda to downplay negative angles, often downplaying or ignoring them.

It will be interesting then to see how or even if  the BBC reports the latest Huffington Post/YouGov poll into the British public's attitude towards Islam. So far I can't see a thing.

The question they posed was a highly specific one, asking their respondents to focus on Islam in general rather than on Islamic extremists:

Do you feel that Islam (as distinct from Islamic fundamentalist groups) poses a threat to Western liberal democracy?

...and even the majority of that 35% who said 'No' chose the 'not much threat' option rather than the 'no threat at all' option.

That is a major shift in public opinion. Will the BBC cover it?
Posted by Craig at 08:53