As per David Keighley at News-watch... 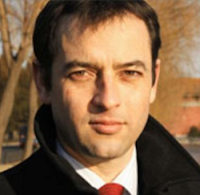 Who's this, giving us an introduction to the EU? (there's a small clue in the above photo!):

The EU, as it says on the tin, is a union, a club, more than half a century old, now 28 nations.  But how big is it?  China is more than twice the size – so too in the United States of America. But compared to America, the EU’s population is far bigger, and its combined economies rival the US. The EU is the world’s biggest single market, people and goods, money and services flowing freely. And there’s the euro – now used by 19 nations and more than 300 million people. To make this market work, EU countries have removed some borders and pooled some decision-making. So who wields power? National leaders do, they gather regularly to take big decisions jointly, such as on the migrant crisis and set the EU’s priorities. Government ministers from each country do – they meet their counterparts every month, when they’re coordinating economic policy, it’s the Chancellor, George Osborne who goes. They, together with the elected European Parliament approve or reject any new laws. 10% of its members are from the UK. And to keep the EU running, are 55,000 civil servants. The UK government employs six times the number.  Most of the EU’s civil servants work for the Commission. It’s independent of governments, draws up the laws, makes sure countries follow them. The European Court rules on any disputes and the Central Bank manages the euro. So what does the EU govern? Well, it has sole power to strike trade deals, makes competition rules like capping mobile roaming charges and fixes fishing quotas. The EU shares with member states the power to act in areas like the rights of workers and consumers, protecting the environment. And its powers are growing. It oversees banks in countries that use the euro, and monitors levels of national debt and deficit in all EU nations. Helps coordinate border controls, has a bill of rights for EU citizens, embassies around the world, even peace-keeping troops. So this union is economic, but political too, growing and changing all the time.

Given that he's saying - in contradiction to those who oppose the UK's membership of the EU - that it's national leaders who "wield power" in the EU rather than the unelected EU Commission, and that, with the elected EU parliament, they approve and reject all laws, I'm guessing it must be some pumped-up Remain campaigner. (David Cameron? Alan Johnson?)

Plus this speaker keeps emphasising the UK's big role in "wielding power" in the EU. (So is it perhaps George Osborne?)

Well, whoever it is says the much-criticised EU bureaucracy is merely there to keep things running and, besides, it's much smaller than the UK's very own bureaucracy - so that's all right then! (Peter Mandelson, maybe?)

Every the Commission does sounds benign. It's "independent of governments" (which is nice). It does things that might please right-wing people and left-wing people, such as "capping mobile phone charges", "striking trade deals" and "protecting the environment".

Sounds great, doesn't it? Who could object? (even if it sounds like pro-Remain campaign material too!)

And as for the many criticisms of the EU? Well, there's nothing about those here. Nothing about the EU Commission being the unelected law-makers of the EU. Or about the downsides of those "fishing quotas". Or anything negative frankly. It's all nice and positive (just as campaign material should be)...

...it's not a pro-Remain campaigner, it's the BBC's Damian Grammaticas and a piece of his that's been all over the BBC in the past couple of days (well, BBC One news and the website at least).

It appears to be only the first of his reports on EU referendum issues. God knows how biased the rest of them will be after this first effort!
Posted by Craig at 18:11