It's the End of the Age of Aquarius 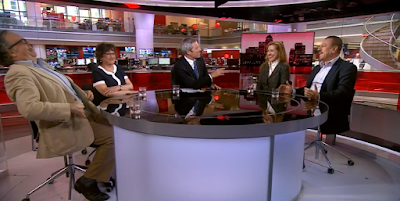 Alas, alas! It didn't turn out to be the dawning of the Age of Aquarius after all. Today's Dateline London reverted to its old ways.

So, yielding to despair perhaps, I now think I must say: "I don't think I'll ever live to see the day when the programme invites four right-wingers to make up its panel. Bari's big, bushy moustache, even more than Hell, will have to freeze over before that ever happens."

That said, I still enjoyed it. Here's why (if you care):

The discussion about Brazil, the World Cup, those doctors, the WHO and the Zika virus found the programme's two most annoying guests, YAB and Bari, squaring up to each other (which was entertaining if not edifying). YAB gently mocked Bari for being a conspiracy theorist. Bari's friend Gavin Esler then gently mocked her back when she (without realising it) began sounding like a conspiracy theorist for the other side of the argument. What larks!

And, being Dateline, the closing segment was all about that ghastly Donald Trump and how poor Hillary might best deal with him in debates. (I think I've caught its general tone by describing it like that).

In a week where concerns about possible serious legal problems for Hillary hit centre stage for a wee while (even - to some, small degree - in the BBC's reporting, briefly), those legal difficulties weren't even mentioned in passing. It was all about that nasty, nasty Mr. Trump and how Hillary might perform against him in debate. Agnes P was bullish about Hillary's abilities; the rest less so.

Oddly, the usually loquacious Bari kept quiet for the most part during the traditional BBC Ten Minute Hate against the Republican presidential hopeful until entering late on, oddly, to compare The Donald to Hillary. The odd thing is that he did so favourably to The Donald. Bari's point? He's got personality; she hasn't.

What was that all about? Bari's admiration for strong, male rulers with impressive heads of hair/impressive moustaches might, perhaps, have been coming out again...

...but, of course, being Bari, it's also perfectly possible that he sees Mr. Trump as less solidly pro-Israel (seeming) than Mrs. Clinton. 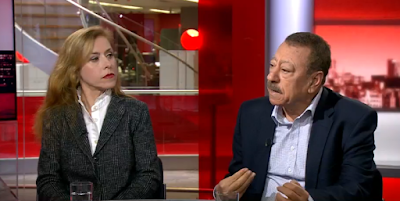 The most interesting section for me, however, was the central section on Libya and the Mediterranean migrant crisis.

Everyone agreed (and who can blame them?) that regime change there (courtesy of Mr. Cameron and M. Sarkozy, with backseat driving from Mr. Obama) was a big mistake.

So far so predictable, but...

(1) Bari told us that 3 million Libyans are now refugees in Egypt and Tunisia. As the internet has told told me that Libya has a small 6 million-or-so population, that's a heck of a lot of Libyans fleeing next door. I didn't know that (if it's true).

(b) Yasmin Alibhai Brown pre-declared that she was going to give an "emotional" rant - and duly did so, railing against wicked West for failing to help the bulk of the Libyan population which, she said, was fleeing en masse across the Med out of Libya. Her fellow guests - and even Gavin Esler - forcefully point out to her, in response, that very few Libyans were actually crossing the Med. (They were moving sideways, so to speak, into Egypt and Tunisia.) It's mostly sub-Saharan/Horn of African people who are making that crossing, they said. YAB, looking as if she realised she'd been well-and-truly fisked, gave up on her point (and, for some strange reason, that made me smile.)

(c) Michael Goldfarb, in trying to counter YAB's fallacious assertions about those crossing the Med from Libya, instead put the 'they are desperate, poor Africans seeking a better life' point about those sub-Saharan/Horn of African folk. That morning's Today (just after 7.30), to its credit, had shown, however, that Michael G is wrong. Those huge numbers of sub-Saharan/Horn of African folk aren't, by and large, the poor of their respective countries. They are the much-better-off of those countries (those with enough money - a lot of money! - to make the journey). Some of them are coming, said the Today 'experts', just to experience the thrill of the bright lights of Western Europe....and to his credit, Gavin Esler very briefly alluded to part of that point in response on Dateline today (without embarrassing Mr. Goldfarb).