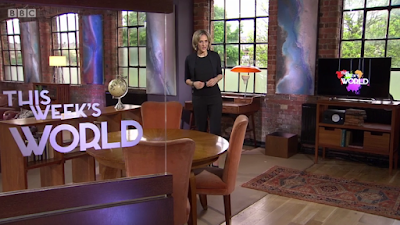 Talking about Emily Maitlis's new and serious Saturday evening BBC Two current affairs programme This Week's World, it struck me as being pretty good by and large.

It was stylish yet substantial, with two excellent films, an amusing little piece from architect (and wit) Karl Sharro, high-powered guests, plus Emily's new easy-going interviewing style. It had lots of jaw-dropping facts along the way too.

My big concern about it last night was the usual one: it had a very strong left-liberal bias. If every edition is going to be this strongly biased then it will be a major problem.

The main topic was migration, and it explored one main argument in the course of at least three of its sections: David Miliband's argument that Europe (including us) should take 10% of all 'vulnerable refugees' in the world (aren't there 60 million worldwide?) and that the rest should be given residency by the countries they are now living in.

It will be interesting to see if any future editions explore a right-leaning position so sympathetically and if a right-winger is ever interviewed whether Emily continues to adopt the same hands-off, non-confrontational approach (something she's now vowing to do - 'The aggressive Paxman era is over, says Newsnight's Emily Maitlis').

Both of the main films focused on the personal stories of migrants (Somalis stuck in a huge Kenyan camp, Cubans fleeing to the US). Both were moving. Both steered away from the issue of migration into Europe.