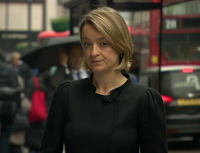 Unusually, tonight's BBC One News at Six placed a Leave angle first in its EU referendum coverage - namely IDS's contention that EU membership is harming 'the less well off' through mass immigration.

After clips from her interview with IDS, Laura Kuenssberg interpolated the following sentence, which (I felt) went quite a bit beyond her brief as the 'impartial' BBC's Political Editor [and the emphasis here was hers]:

There is some evidence immigration's pushed some wages down a little but the possible economic turbulence if we left the EU could dwarf any potential rises.

It's the second half of that sentence ("but the possible economic turbulence if we left the EU could dwarf any potential rises") that particularly troubled me, impartiality-wise.

I'd expect a comment like that from, say, George Osborne but not from one of the BBC's top reporters.
Posted by Craig at 20:18