The older you get the more you admire the State Opening of Parliament. It’s the kind of ritual you’d probably laugh at when you‘re young.

Years later you might feel it’s reassuring that all these grown-up people take it seriously enough to get all togged up in their ceremonial outfits and perform with solemnity and respect.

Tradition and pomp provide a sort of illusory parent substitute - a comforting feeling that the adults are being responsible, taking care of things in another room, and we ordinaries can carry on being irresponsible in the nursery.  Religion without the hassle.

Anyway, I enjoyed watching the State Opening on TV. Black Rod, with a slight smile, approaching doors that would slam in his face. (What if they forgot to slam them? Would he fall over like Del-Boy leaning on an unexpectedly non-existent bar?)

The Queen with bejeweled crown and several pageboys carefully holding onto her long velvet train. Fabulous pomp.
Of course the commentators had to find something bitchy to say, so they plumped for Jeremy Corbyn supposedly ignoring David Cameron’s polite conversation, but I’m sure I saw Corbyn’s lips move. I hope he was wondering “What the hell am I doing here”.

When Dennis Skinner told Jeremy Hunt to ‘wipe that smirk off his face’ last month, one commenter posted the following:

“He begins his spiel, hand in one pocket, like a cocksure, acerbic '70s working man's club comic, unfortunately, this act rapidly descends into a highly convincing performance of an addled & bitter, urine soaked pensioner, shouting at pigeons in a supermarket carpark.”

Today Skinner shouted loudly at no-one in particular: “Hands off the BBC!” 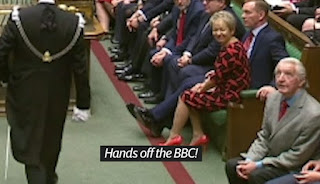