Here's a Twitter  exchange between a BBC Scotland political correspondent and a BBC Middle East correspondent....rudely interrupted by our old friend DB... 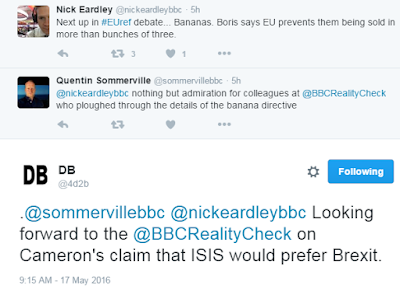 I can see DB's point here.

BBC One's News at Six mentioned Dave's 'ISIS 4 Brexit' point but did so very much in passing (merely a clip of the PM speaking) and quite some way into the bulletin - and without so much as even beginning to bat a critical eyelid about it, never mind raising up a storm of 'controversy' about it.

Boris finds all hell descending upon him for mentioned Hitler (and Napoleon and the Romans). David Cameron calls Caliph Ibrahim of the Islamic State for Brexit and...what from the BBC (and their like)?

Pretty much nothing.
Posted by Craig at 22:12