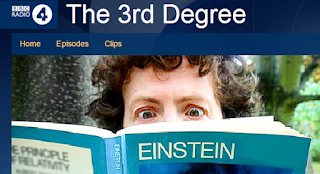 A new series of The 3rd Degree began on Radio 4 this week.

It's the university-based quiz show that pits students against lecturers and its host is Steve Punt from The Now Show.

Now, I will say that I enjoyed it, as ever. I especially liked the bits where I got the answers that neither the students nor the dons got. I felt insufferably superior as a result. Then they talked higher mathematics and I felt thoroughly ashamed of myself again.

My point, however, is the predictable one (for this blog) about Radio 4 comedy.

Our Steve began the programme by naming four famous alumni of York University. They were Harriet Harman, Peter Hitchens, Christine Hamilton and Harry Enfield. And obviously Steve was going to be 'Radio 4 humorous', sarcastic even, about them...

...and given that Harriet Harman was among them I'd have very much hoped he was!

(Everyone on blogs like ours loves a good Harriet Harman joke!!)

Except, of course, this was 'Radio 4 comedy' and Harriet isn't to be joked about on Radio 4 - unlike, of course, Peter Hitchens of OMG The Daily Heil:

The next punchline mocked Christine Hamilton and "disgraced Tory MP and UKIP wannabe Neil Hamilton". (Harry survived as a result).

I think that pretty much sums up Radio 4 comedy for ever and eternity.
Posted by Craig at 18:32