Last night’s Sky News showed the new London (Muslim) Mayor, Sadiq Khan attending the Holocaust memorial event in North London yesterday. They even included short clip of the ceremony. It was a significant gesture on Khan’s part, much appreciated by the Jewish community, and a hopeful indication that his intention to clamp down on or root out antisemitism is honourable. 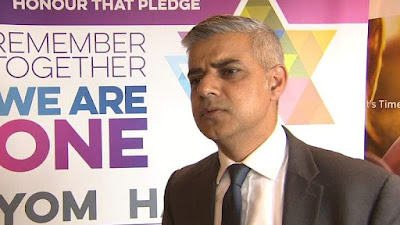 The BBC, however, in their late evening bulletin was only interested in the implied rift between Khan and Corbyn. They even showed an interview with Khan, which was filmed in front of the poster in a location in or near the memorial’s venue. We know this from Sky’s report, which included similar footage. The BBC didn’t make anything of Khan’s attendance at the ceremony, in fact I’m not sure they even mentioned it.

Mishal Husain was the newsreader, not that one could hold her personally responsible for the omission, but a mention would have been nice, coming from her.
Posted by sue at 16:40