(Most of the following post was written before Ken stepped in to inflame the antisemitism row.)

I could hardly live much further away from Bow Bells, but I do care about the rhetoric surrounding the London Mayoral elections.

Ken, the previous Labour Mayor, was more famous for antisemitism and cronyism than for London-specific policies. He improved transport, apparently. But what do I care? I’d rather have both feet nailed to the floor than do a daily commute around the capital. Boris was okay because he was `Boris’. He introduced bikes.

A bunch of uninspiring candidates unconvincingly posing as all things to all people. Both the main contenders say one thing to one group of voters, the opposite to the next.

David Cameron is still fixated on the crudely simplistic concept that Islam is a great religion with a Moderate majority and a tiny violent minority.

“...what we face is not some clash of civilisations between Islam and Christianity or Islam and Buddhism. What we are seeing is a small minority within one of the great religions of our world, Islam, believing that there is only one way—a violent, extremist way—of professing their faith. This is a battle within Islam, and we have to be on the side of the moderate majority and make sure that they win it. We have to really understand what is happening, otherwise we will take the wrong path.”

But he was referring to the recent Muslim-on-Muslim murder in Glasgow, not those dodgy friends of Corbyn, Ken and Sadiq. Or even Zac.

At another PMQs David Cameron made a hooha about Sadiq Khan’s ‘IS-supporting friend’  but it transpires that the gent in question is a Conservative, and a supporter of an Islamic State, not the Islamic State.

If we are going to condemn, not just violent extremism but also the extremism that seeks to justify violence in any way, it is very important that we do not back these people and we do not appear on platforms with them and I have to say I am concerned about Labour’s candidate as mayor of London who has appeared again and again and  again.

Well, the leader of the Labour party is saying it’s disgraceful. Let me tell him. Right. So. Suliman Gani. The honorable member for Tooting has appeared on a platform with him nine times. This man supports IS. He even shared a platform....Mr. Speaker. I think they are shouting down this point because they don’t want to hear the truth. Anyone can make a mistake about who they appear on a platform with. We’re not always responsible for what our political opponents say, but if you do it time after time after time, it is right to question your judgment.

I somehow think he should have said: “We’re not always responsible for what our political colleagues say,” (rather than opponents) It doesn’t make much sense to say opponents, for obvious reasons.

It’s likely that Sadiq Khan is not a clandestine extremist waiting for a chance to pounce so much as a politician who’s after your vote.

Maybe he is a would-be one-man Trojan Mayor? They do say there will be an Islamic flag flying over Buckingham Palace in a minute.

The Royals probably wouldn’t care. They are Arabists who don’t deign to darken the door of the Jewish State. Charles likes to shimmy wearing Arabic attire. The Queen herself is fond of the headscarf.

The BBC could have made a bigger issue over Khan’s serial involvement with dubious clients when he was a human rights lawyer. (In fact have any BBC political interviewers brought up his relationship with Louis Farrakhan and Yusuf al-Qaradawi etc.?)

When the unfortunate Uncle Tom thing came to light, everyone assumed he’d accidentally revealed his own Islamist disdain for moderate Muslims who suck up to whitey.  But it’s equally possible that he was merely using throwaway, short-hand phraseology for ‘assimilated Muslims’ while explaining that there was little point in preaching to the converted when there are extremists to engage.

As Craig says, the BBC did not report all these things, and if they had, it might just have swayed a few voters. 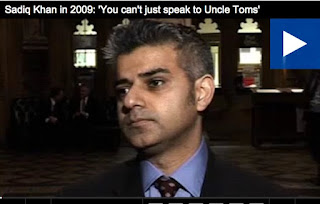 Let’s be realistic. If you want to be Mayor of London the Muslim lobby is probably worth getting onside.

We don’t really know if Sadiq is an ambitious self-serving politician, a Trojan Islamist or an idealist who wants to make the world a better place. As London’s Mayor, would he be dangerous? How dangerous? Blind eye to corruption? Blind eye to antisemitism, homophobia, intra-Islam violence? Funneling dosh to dodgy causes? Think Lee Jasper.

No matter how many times Sadiq says he’s going to be a Mayor for all Londoners, the BBC is so delighted that it insists on calling him the Muslim Mayor.

I thought dwelling on that was deemed racist.
Posted by sue at 19:23