I put this question to an objective observer.

"Do you think the BBC is justified in juxtaposing words and images of the mother of a terrorist and the mother of one of his victims?"

"Well, possibly. It depends if the mother of the terrorist is contrite."

"Then it doesn’t seem ethical."

"The mothers were a Palestinian and an Israeli."

"Oh, well, I suppose some might argue along the lines that the Israelis have an army and the Palestinians have nothing." 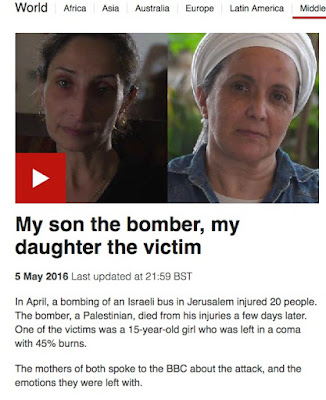 The objective observer was playing devil’s advocate, by the way. He didn’t think there was any justification for giving the two mothers equal billing so to speak, but he does know a lot of people who would.
They might say things like “What choice to the oppressed have when the oppressor is so powerful and so evil”
Only those hostile to Israel are likely to think there is any justification for the BBC presenting equally sympathetic pictures of victim and perpetrator, and even so, some may have reservations about the morality of placing a bomb on a bus carrying civilians, or glorifying the act itself.

We wrote about Jeremy Bowen’s report on 4th May.  Someone at the BBC must have made the decision to take Bowen’s footage and craft it into a human interest tear-jerker.

The Palestinian mother looks like a Modigliani painting. She’s speaking tearfully in broken English, pleading for ‘freedom’ and telling us “they took our land. They kill us” “If they want peace they give us our rights”

All these things will resonate with the Israel-bashers, the pro-Palestinian agitators who stick with the belief that Palestinians are ‘just like us’ despite their enduring quest for martyrdom, which isn’t really a bit ‘like us’ as far as I’m aware.
Note Bowen teasing out that selfless remark; sacrificing Abed’s life was 'the price of freedom.' How noble of Abdel the martyr and his principled, self-sacrificing family.

“Of course, I was very, very sad as a mother but when I saw the people – how all the people are proud of what my son did. Because I think he did the thing that all the people wanted to do. He was very angry about what’s happened. He thought that they are our occupiers. They took our land. They kill us. They always do many things to make us angry. They don’t want peace. Always, he said, Israel don’t want peace. Because if they want peace, they give us our rights. We are Palestinian people and we know every people want to have freedom. We have to pay something. (Bowen: You have to pay for freedom?) Of course. Because Abed wanted that, I think. I always respect what my children want.”

Big portrait of the martyr in the background, smiling.

The editing suite chose that bit of film, and they also chose the next bit of dialogue from the Israeli, which reinforces the concept of oppressor versus the oppressed.

“We simply can’t allow them to take over us”

This was a subtitle. What can the Israeli woman mean by “take over us”? Is that an accurate translation?

The translator doesn’t seem quite sure. We can’t what?

“We need to live in peace, we need to live with friendship and love in our world, not to be in fear. I should be able to go out with my daughter to have fun and come back without us being hurt”

It’s that same old half a story, cleverly cherry-picked to reinforce the BBC’s agenda. Half a story; no background, no context, no objectivity.   False equivalence is entirely different from impartiality

Even so, if you don’t see it like I do, and you really do think the Palestinians have no choice but to stab for freedom (from the river to the sea) then as BBC Watch points out, how can you blatantly justify an act of terrorism and glorify the terrorist on your website when you wouldn’t dream of doing so in the case of any other conflict?

This ‘Two Mothers One Conflict” nonsense is utter manipulation, perhaps worthy of the advertising industry and patently unworthy of a National Broadcaster with the obligation to be impartial written into its charter.
Posted by sue at 20:19