Let me finish my point!

I was toying with the idea of switching over to ITV after Andrew Marr and before Andrew Neil  to see what Peston’s show was like (I hear David Cameron was a guest) but when I saw who was on the front row of TBQs I stuck around to see what Adam Deen, Douglas Murray, Peter Hitchens and Kate Smurthwaite would have to say.

The question was to do with the ‘Prevent’ strategy. “Is countering extremism compatible with freedom of religion?”. (No-one even agrees about the exact definition of extremism, so the  programme was doomed to go nowhere)

Today’s representatives of Islam were Dr. Rizwaan Sabir (Lecturer Liverpool John Moores University) and Mohammed Khaliel. True to form, they were pugnacious and reluctant to let anyone else speak, but that’s probably why the producers invited them on. Half the precious air time was wasted by people asking if they might be allowed to finish their point.

Dr. Sabir said there was “no empirical evidence that an extreme form of Islamic Ideology is in fact the cause of terrorism.”

Peter Hitchens made a strangely ill thought-through argument, which seemed to be that freedoms of “thought” should never be impinged upon - including the thoughts and words of proponents of radical Islam - until actual violence is involved.

He said that acts of terrorism have always been undertaken by petty criminals, drinkers and drug addicts, not theologians or scholars of Islam. You don’t see many imams carrying out their own dirty business, that’s true. They’re too fond of their privileged position in this life to splat prematurely on to the next.
The rather large flaw in his argument is that those freethinking theologians and scholars are in the business of manipulating the petty criminals into doing their bidding, lured by the promise of martyrdom and all those seductive virgins.
I assume Peter Hitchens can only think this because he fears that his own Christian views might be criminalised, were the Prevent strategy to be applied too rigorously.  He might incur an ASBO.

The thing that never fails to amaze me is the set. Who in their right mind could have deliberately picked the theme of orange, blue, bronze(quilted), blue, yellow, purple, ochre, blue, veridian(quilted), blue, tangerine and yellow vertical stripes as a backcloth to this programme. Even before anyone has said a word it’s highly depressive.

It’s even worse than Andrew Marr’s new set, with the orange upholstery and the vermillion cushions. 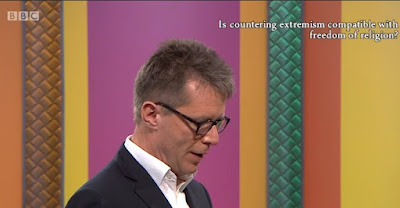