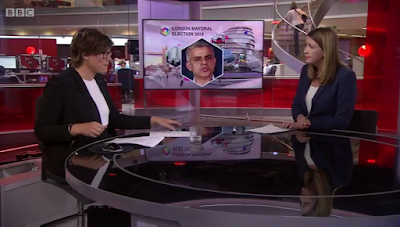 It was interesting watching the early evening news bulletin on BBC One last night to see how they reported Sadiq Khan's inauguration as Mayor of London in Southwark Cathedral. They had three main angles on it: (1) that fact that the first Muslim mayor of a major European capital was "celebrating diversity" throughout his swearing-in; (2) the  criticism of the tone of the Conservatives campaign and, above all, (3) the absence of Jeremy Corbyn.

Almost one minute of the less-than-two-and-a-half-minutes-long report was spent on the latter question, ending with BBC reporter Alex Forsyth saying:

It's undoubtedly a boost for Labour in another disappointing set of election results. But the fact that the new London mayor has distanced himself from Jeremy Corbyn means there's a limit to the credit the Labour leader can take for this victory. For now it belongs to the new face of London.

Then it was back to the studio where Alex Forsyth discussed the same matter with newsreader Kate Silverton. The burning question on Kate's lips was, "How big a surprise was it that Jeremy Corbyn then wasn't there today?" Alex said it was "unusual" and "read into that what you will". She said "it raises questions" about How Sadiq Khan and Jeremy Corbyn will work together.  Then it was back briefly to the "growing criticism" of Zak Goldsmith's campaign.. The question there is whether it will damage to the Conservatives' appeal to ethnic minority groups.

Incidentally, given that people weren't suppose to talk about Sadiq Khan's Muslim faith during the election, isn't it astonishing how much the BBC is mentioning his Muslim faith now? They've gone from barely mentioning it to never shutting up about it within the space of 24 hours.
Posted by Craig at 10:35