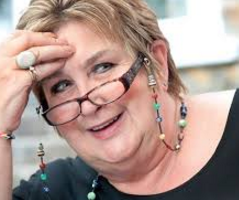 Do you remember the controversy when Woman's Hour tried to ignore the mass assaults in Cologne (and elsewhere) on New Years Eve, despite being a feminist programme?

Woman's Hour had two Labour MPs on yesterday to discuss the EU referendum in the light of women's rights: Harriet Harman (Remain) and Gisela Stuart (Leave). Dame Jenni Murray carried out both interviews, and put this question to Ms. Stuart:

We've talked about the men who are at the front of your campaign - and, equally, at the front of the other side. One interesting thing that came out was your Vote Leave campaign director, Dominic Cummings, tweeted...After those New Year attacks in Cologne that so much was made of he tweeted, "There's nothing to stop sex attackers flying to the UK when they get EU citizenship. Vote Leave = a safer choice". How do you respond to that kind of inflammatory and, arguably, racist comment?

How typical of BBC people like Dame Jenni Murray to consider that tweet "inflammatory and, arguably, racist"! And how typical that she's still so dismissive of what happened in Cologne (and elsewhere) at the start of the year!
Posted by Craig at 06:58