Unusual things on 'Marr', and that 'Sunday Express' lead story about Turkey and the EU

This morning's Andrew Marr programme did a couple of unusual things during its paper review:

The clip mentioned in the second tweet there was of Boris a few years back saying that Turkey should be let into the EU and that it's not right that they should be excluded, especially just because they are Muslims.

Both of those things did happen and both of them are unusual.

Somewhat more usual, however, was Andrew Marr doing a spot of impromptu editorialising and describing the Sunday Express's take on the possibility of huge numbers of Turks moving through the EU to the UK as "much more extreme". 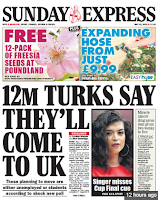 That same headline really isn't getting 'a good press' from the BBC today. Roger Johnson on BBC Breakfast earlier felt the need to add "Of course Turkey is some way to joining the EU yet" after reading it out, and BBC Middle East correspondent Quentin Somerville gave it the full BBC Twitter treatment (albeit pithily), echoing the head of CAABU: