While I'm giving credit where credit's due...

It's Andrew Neil again, on BBC One's The Sunday Politics - and, hopefully, this link takes you to the right place to enable you to watch Andrew Neil & Co. debate the issue of the EU and women's rights with Harriet Harman.

We're firmly in 'car crash interview' territory here....especially from 9:07 in, when AN lists a long list of leading female Leave campaigners and invites Harriet to give an equivalent list. She duly 'does a Harriet' and stonewalls. But it's no good. It's 1-0 to Andrew Neil and Harriet's car is out of control, scraping along dozens of others Remain campaign cars as it hurtles towards disaster.

It then got even worse for her.

Answering her claims that the EU is good for women's rights, AN then showed her the top 7 people in the EU and asked her if she noticed something common to them all: 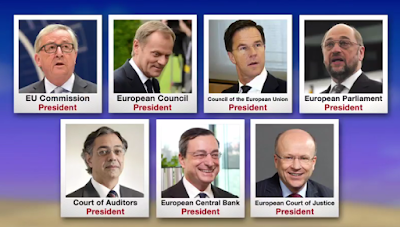 After trying to 'do a Harriet' again, she said - more than once - that she didn't know who any of these men are...

...which, given that they include EU Commission President Juncker and EU Council President Tusk (former Polish PM) and European Parliament head (and long-term leading light in the EU's Socialist group - which includes Harriet's Labour!) Mr Schultz, is very hard to believe - except that this is Harriet Harman!

And then, still flailing around, she accused Andrew Neil of picking seven "random" men! AN, of course, immediately disabused her of that suggestion.

She was now not only looking at the smouldering remains of her own car but a twenty-mile pile up behind her (entirely caused by herself)...

...though, also being Harriet, it has to be said that she still didn't bat an eyelid.


Her pro-EU arguments were severely dented by The Sunday Politics though - eyelids or no eyelids.
Posted by Craig at 16:50