No brain at all

Yesterday’s survey of websites and blogs was more dispiriting than ever.

First thing was Melanie Phillips addressing an American audience on the topic of antisemitism set the mood. (Craig posted the video below)
ISGAP stands for Institute for the Study of Global Antisemitism and Policy.

Melanie’s frustration at the false equivalence between antisemitism and Islamophobia being parroted over and over again on the BBC and in much of the British media, the lack of coverage of the antisemitism that pours out of the Arab world (specially on Palestinian media) and the media’s apathy over the violence and terrorism in Israel, unless a Palestinian is killed or injured as a result. All too painful.
Hardly anyone in the UK knows the truth, says Melanie, apart from a few fanatics like her.
Here’s an example of news that should be in the headlines but isn’t even on the back pages.
If you believe the Palestinians want ‘a two state solution’, think again. I know it’s tedious to click on links, but please do it.

“As Israel celebrates 68 years of independence, the Palestinian Authority still actively disseminates its ideology that denies Israel's fundamental right to exist in any borders. The PA regularly proclaims and actively teaches Palestinian children that all of Israel is an illegitimate “occupation,” and that Israeli cities such as Haifa, Jaffa - Tel Aviv, and Acre are all “occupied” cities. Palestinians are taught to anticipate a future without Israel when all of Israel will be part of the “State of Palestine.”

Of course it’s not only Mahmoud Abbas who’s saying such things, (as if it wasn’t bad enough that the actual leader of the Palestinian Authority can say it loud and clear, utterly confident that the West will ignore it.)
No, it’s the world’s oldest hatred, moulded into a political ideology which is systematically ground into the hearts and minds of Palestinians from the cradle to the grave.

I saw these clips from the meeting which took place at the Union of UCL other day. It left  a bitter taste, but I didn’t dwell on it then. However, since it’s appeared on both UK Media Watch  and
Richard Millett’s blog, I’m mentioning it here, if only for the awfulness of the baying mob. They looked like Guardian readers. Middle class, left-wing and full of a sense of their own righteousness. And rude as hell.
I know this kind of person very well. They’re so ill-informed, but they don’t even know it. It’s an unknown unknown. The way they heckled Jonathan Hoffman showed just how bigoted and malicious they are.

I listened to a phone-in. (H/T Chrish+Biased BBC) Should 'Subhan Allah' be plastered on buses at Ramadan to advertise the charity ‘Islamic Relief’.  Excuse the innuendo.
After interviews with Tommy Robinson and the ‘useful idiot’ promoting the ads, there was a phone-in.  OMG. What. Are. We. Like? Passionate, maybe, but can’t string a sentence together.
What’s the use of that? 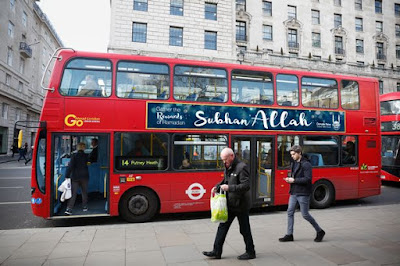 Things are dire. I feel even more like Eeyore than usual.

“Eeyore has a poor opinion of most of the other animals in the Forest, describing them as having "No brain at all, some of them", "only grey fluff that's blown into their heads by mistake"