Making no bones about transitioning 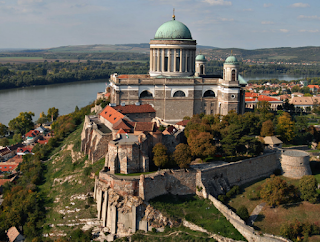 The topics on this morning's Sunday were, as so often, largely redolent of left-liberal concerns:

(a) Putin and the Patriarch going to Mount Athos in Greece.
(b) transgender Christians.
(c) the Church of Scotland and same-sex marriage.
(d) a multi-faith choir which celebrates multiculturalism.
(e) a relic of St Thomas Becket going to England from Hungary.
(f) the faith of Nelson Mandela, and
(g) a dispute over the World Humanitarian Summit, with Medecins Sans Frontieres refusing to attend.

The bit on a fragment of a bone believed to have been part of the body of St Thomas Becket making its way over to England for the first time in more than 800 years (from Trevor Barnes) was interesting though. Its usual home is the Basilica of Esztergom [pictured above], Hungary’s most important Catholic church. During the heavy oppression of religion under Communist rule, a cult developed around the saint. He was seen as a symbol of resistance to an over-mighty state. (Maybe Brexit supporters could adopt it as their relic too).

On the subject of transgender Christians, I was fascinated at the way guest presenter (and former BBC South Africa correspondent) Mike Wooldridge conducted his interview with two transgender vicars - Rev Rachel Mann and Rev Christina Beardsley [both of whose surnames made me laugh, for some reason]. Rev Mann and Rev Beardsley both believe that being transgender and being Christian are wholly compatible things.

Though a veteran BBC reporter (with well over 40 years of service for the corporation), Mike conducted the interview as if he was a Radio One Newsbeat reporter (or Stacey Dooley), brimming with understanding and concern for his guests (and their concerns) and sounded fluent in 'transgender-speak' ('transitioning', etc) throughout.

He even described people who don't accept that being trans is compatible with Christianity as "those who have convinced themselves" that they are incompatible - a somewhat loaded way of characterising such religious 'conservatives'.

I wish him well when he eventually transitions to being Michaela Wooldridge.
Posted by Craig at 15:40