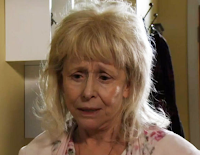 There's no heroism in suicide
Why do BBC bosses love suicide so much? Every hard case of a sick or injured man or woman wanting to end it all gets sympathetic top billing on BBC bulletins. And now the propaganda soap, EastEnders, has treated the fictional suicide of the fictional Peggy Mitchell (played by Dame Barbara Windsor) as a moment of heroism and dignity.
How can I break it to them that this is only one opinion on a contentious subject, and that they are yet again breaching their obligation to be impartial?
Suicide leaves many hard wounds behind, and many people still believe it to be wrong. Much can be done to prevent the dying from suffering, the hospice movement needs all the help it can get, and the BBC could do a lot to promote it.

Though I'm a social liberal on such things myself, I can see PH's point about BBC bias here - if he's describing the programme (which I didn't watch) correctly.

If he is describing it correctly, then it's a case of bias (whether we personally care about the bias or not), isn't it?

Whether it's a simple failure to even consider that there could be another perspective on the issue or, perhaps even more worryingly, an unwillingness after recognising that there is such a perspective to duly provide 'balance', Peter seems to have a point here, doesn't he?
Posted by Craig at 16:00