Despite the media’s exasperating habit of picking up and running with real “gaffes” and inventing fake ones, I still think the BBC is making a brave effort to portray both EU campaigns even-handedly. To the best of its ability.

The EU referendum has brought about some strange cross-party alliances, which supports the theory that there is but a cigarette paper’s difference between soft left Conservatives and centre-left (old) New-Labourites. Now the biggest divide seems to be between Corbyn’s hard left and all the rest.

A good example of this was Lord (Norman) Lamont and Charles Clarke on this morning’s - no, that’s this afternoon’s -  Daily Politics. They agreed on almost everything. 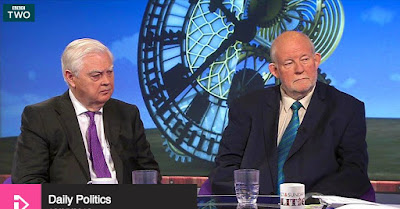 I’m easily distracted. I mean, people always have something to say about women’s outfits and hairstyles, and I did wonder for a moment if Charles Clarke’s parents were ever offered the chance of an ear-pinning operation on the NHS. Distinctiveness is just what the BBC is after.

Oh well. While we’re on the subject of trivial distractions, Lord Lamont’s eyebrows are less significant now he’s a Lord, and I think they’ve been trimmed, which is a good thing.

Jo Coburn seems to be letting her hair grow, and do you think she has had it lightened?
Jo is remarkably unstylish for a BBC babe, but perhaps that’s insurance against being dismissed as a mere babe. Like wearing specs even if you don’t need them to denote intelligence, as in strip cartoons, where the heroine eventually takes them off, and the hero says “But hey, you’re not a swat! You’re beautiful!” and they kiss.

Jo Coburn doesn’t do anything like that, and today she was relaxed and  percipient.

The answer to the quiz was that Newquay might be the venue for a space station, being that it already has an airport with a runway.

What if you accidentally got on the wrong plane? Last time I was at Newquay airport the procedure seemed a little amateurish, so it could happen. What if, instead of Stansted, you ended up on the moooon?
Dear Mr, Porter, whatever shall I do? I wanted to go to Birmingham and they’re taking me to the moon. Send me back to Newquay as quickly as you can, Oh! Mr. Porter what a silly girl I am!

Anyway Chas and Norm got along fine, opining on the economic interests of the UK, even though they are from different sides of the divide and Jo was on the side of the BBC.

The topic of the government’s proposal to ban extremists was more up my street. Obviously the definition of ‘extremism’ is key, and it was agreed that there are already sufficient laws in place to tackle incitement to violence; they decided that if extremism stops short of actually inciting violence it can be seen as ‘opinion’, which is tricky.
Banning it would be problematic, said Lord Lamont, “to suppress it would be wrong”. However he did mention Sayyid Qutb, and:

“Brotherhood has set up an office in Cricklewood, North West London. Doha’s Al Jazeera channel is a critical Arab media outlet for the Islamists.”

Jo Coburn introduced the EU into that subject and neither guest seemed to know whether we’d be safer in or out.
Natalie Bennett appeared. She looked exhausted, but as she has achieved everything she set out to do, non, je ne rerette rien.

Next up, Max Mosely’s “soapbox”. Needless to say I’m not a fan. His voice is as sinister as his persona. He resisted making a meal out of the obvious comparison between his and John Whittingdale’s misadventures with the press. Very gracious I’m sure.

The most grating part of this particular Daily Politics was of course inviting Rachel Shabi to opine on the ‘antisemitism in the Labour Party’ enquiry. She’s just about the last person in the world I’d have liked to see addressing that, because when reporting for the Guardian her attitude to Israel  frequently crossed the notorious line separating anti-Israelism from bigotry.

We hear that Miss Chakrabarti has been briefing us. She’s launched an enquiry to look at Islamophobia as well as antisemitism. “While it was triggered by allegations of antisemitism, we’ll look at all aspects of racism, including Islamophobia” she has announced.
“It would be a nonsense to just focus on one area, given this opportunity”

In other words, the whole exercise is a nonsense.

Shami has joined the Labour party herself so that everyone knows she’s acting in the Labour Party’s interests.  Luckily she hasn’t been asked to launch an enquiry into any other party then. Just imagine if she’d launched an enquiry into antisemitism in the Conservative Party (to which Rachel Shabi believes the enquiry should more properly be directed) and had to join the Conservatives, or UKIP.  She’d be facing an insurmountable moral dilemma then.

“This looks like a robust review.” “Is there a problem with antisemitism in the LP?”


“There is a problem with antisemitism in society.”


“Do you think there’s a particular problem within the LP itself?”


“I think there’s a particular onus. We tend to expect progressive parties not to be antisemitic, whereas we don’t have that weight of expectation on the Conservative Party.”

Jo Coburn mentioned the importance of language, with regard to anti-Zionism and antisemitism.

(Does she think Gaza is occupied?)

“Do you think there are people who use that as a proxy for antisemitism?”

That’s an ideal question to put to Shabi. I don’t think.

“I don’t think antisemitism is the same as anti-Zionism, but I do think, obviously people who are Jewish aren’t ... there are going to be things said about the occupation that aren’t pleasant to hear....”

Charles Clarke went on to dispense words of wisdom about language, waving his hands about expressively and evidently knowing very little about antisemitism. He was very moved by Naz Shah’s apology though, and strung together several ‘verys‘ for extra emphasis.

I must say that Naz Shah didn’t actually “talk about deporting Israelis to America” as Jo Coburn said. Shah retweeted a wretched map, and endorsed the idea in a jocular and very silly manner. Just to be more accurate.

I mean, if we’re talking about the importance of language, and being very very very careful about it, we might try not inventing fake gaffes.
Posted by sue at 17:56