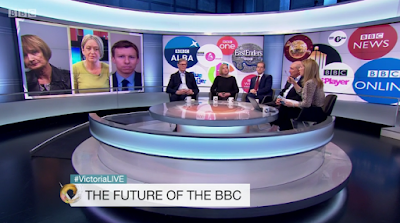 The Victoria Derbyshire show had a discussion on 'The Future of the BBC' this week. The assembled guests ranged from a viewer called Victoria (who "supports and loves the BBC") through to Ryan Bourne of the IEA (who wants to privatise the IEA). Tessa Jowell and Bill Cash were also on, along with former BBC/ITV executive Roger Laughton and pro-BBC writer Gail Renard.

The discussion was a bit Tessa Jowell-heavy (she got more than four times as long as Ryan Bourne, for example, and nearly twice as long as Bill Cash) and Ryan Bourne only got one bite of the cherry whereas everyone else got two, three or four goes, but it was interesting nonetheless.

The bit that surprised me, however, was Bill Cash's comments about BBC bias - especially over the the BBC's EU referendum:

Could I really come back to this question of the use to which the money is made (sic)? Because 'educate, inform, entertain'...

Now as I understand it, and I've pressed very hard for this in papers I've written or in consultation exercises, that impartiality should be made one of the main principles of the BBC, because actually that's where the money, as it were, certainly in terms of the content of information and current affairs, etc. certainly comes home to roost.

The real question is: Do people really get the proper opportunity to hear both sides of the argument in a fair way?

And actually, in fairness, I will say the BBC has improved, over this EU referendum. I'm very glad to say that I who've been very critical, my European committee was very concerned, we have noticed a very significant change. It may not be perfect but it's certainly a great improvement.

Does it seem to you, in your drawing room, that the BBC has 'greatly improved' as regards impartiality over the EU referendum debate?
Posted by Craig at 06:51