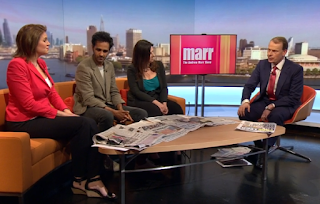 Just to repeat what Boris Johnson actually said in his Sunday Telegraph interview:

The whole thing began with the Roman Empire. I wrote a book on this subject, and I think it’s probably right. The truth is that the history of the last couple of thousand years has been broadly repeated attempts by various people or institutions – in a Freudian way – to rediscover the lost childhood of Europe, this golden age of peace and prosperity under the Romans, by trying to unify it. Napoleon, Hitler, various people tried this out, and it ends tragically.

The EU is an attempt to do this by different methods. But fundamentally what it is lacking is the eternal problem, which is that there is no underlying loyalty to the idea of Europe. There is no single authority that anybody respects or understands. That is causing this massive democratic void.

Now compare that with how this evening BBC One Evening News bulletin reported it:

The prominent Vote Leave campaigner in June's EU referendum Boris Johnson has compared what he claims is the ambition of some in Europe to create a single superstate to the aims of Adolf Hitler. In an article for a Sunday newspaper he said both the Nazi leader and the EU shared similar goals but today's politicians were simply using different methods. The shadow foreign secretary Hilary Benn, who backs the Remain campaign, said his comments were "offensive" and "desparate".

Is that fair and honest reporting of what Boris said (even despite his breach of Godwin's Law)?

I don't think so, and in my defence I call Andrew Marr who said on his programme this morning:

Julia Hartley-Brewer: This is being overplayed. He's saying the European Union are looking towards a federal superstate, and various people have tried this: Napoleon, Hitler...of course Hitler is the mention everyone gets, but what he is saying is true.

Andrew Marr: It's much more nuanced than the headline suggests. I'm not normally one to say 'Boris is very, very nuanced but he's very careful. He specifically says 'I'm not saying the EU people are like Hitler.' He's saying, 'Again and again and again we've tried to have a united Europe and every single time it's ended in tears'.

Though Julia and Andy were talking about the Sunday Telegraph's sensationalist headline there, they could easily have said exactly the same about the BBC's own reporting of this story.
Posted by Craig at 19:47