Big Bird Singing in the Dead of Early Evening 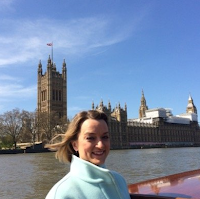 Of all the things about the UK election coverage yesterday, it was the social media reaction to Laura Kuenssberg that most caught my attention.

From lunchtime to early evening I learned from the BBC that the SNP had won big in Scotland again.

Their [near] triumph and Nicola Sturgeon's victory comments led the BBC One News at One and News at Six.

Both bulletins - especially the News at Six - also made much of the remarkable revival of the Scottish Conservatives under Buffalo Ruth and Labour's astonishing, absolutely humiliating third place there. [The striking (if modest) rebirth of the Lib Dems also got the briefest of mentions.]

Also in the headlines of both bulletins (and the BBC website at the time) was Jeremy Corbyn claiming that Labour had "hung on". The bulletin I watched most closely was the BBC One News at Six and, though the exact opposite of a Corbynista, I have to say that I watched Laura Kuenssberg and John Pienaar's reports and thought (especially whilst watching Laura's piece), "Oh dear! I bet the Corbynistas on Twitter are going to go completely mad about this!"...

...and the Corbynistas on Twitter did go completely mad about it. A 38 Degrees petition (of Leftists) demanding that Laura K be sacked from the BBC has rocketed up ever since. (Anti-Laura Rightists might like to join in).

And, to be honest, I really can't say I blame them (though I smiled at the thought of their discomfort throughout). Laura put on a sneering tone and was largely negative about Labour's performance here.

I was going to transcribe it to show you what I mean but the BBC iPlayer has been experiencing major difficulties over the past couple of days and that bulletin hasn't been available to re-watch.

All of this backs up an earlier exchange here at ITBB over Laura K's strange confrontation with John McDonnell which seemed unusually aggressive - and pointless  - on her part.

And - as the Corbynistas on Twitter would also point out - Laura's Twitter feed has been Labour in-fighting-obsessed (and not to Mr. Corbyn's advantage).