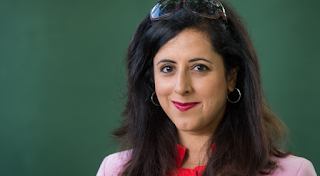 And here's Anita Anand on this afternoon's Any Answers introducing the programme:

Well, as you have been hearing in the news, the first Muslim mayor of any major Western capital has been sworn in. I'd love to know from you today what does the election of Sadiq Khan do to our political status quo? What does it say about London? What does it say about the rest of the country? And what should parties take away from this? There have been accusations of anti-Semetic behaviour against Labour, Islamophobia against the Conservatives. What exactly is going on with our politics right now? And is the EU debate just going to exacerbate the very worst? What is it about our style of campaigning these days that obscures or maybe even destroys integrity? I don't know whether you saw, but Zak Goldsmith's sister Jemima criticised his campaign yesterday on Twitter saying "It's sad that Zak's campaign did not reflect who I know him to be - an eco-friendly, independent-minded politician with integrity." Your thoughts on that. And, yes, what about across the pond? We've just seen the anointing of Donald Trump as the Republican candidate presumptive. I'd love your thoughts on that. What would that kind of world be? All that, and I'd love to hear from you if you are a teacher or a parent. What have you made of the government's latest u-turn on academies?

And here's Anita interrupting a caller who was complaining about  people (like Anita) mentioning Sadiq's Muslims background:

It's signalling though. I mean, I understand what you're saying and I hear what you're saying but there have been a lot of editorials in foreign newspapers also saying, 'Look, this is extraordinary. We've been writing about the tone of this campaign' - and they have, in America, in Pakistan for example, which is the country where Sadiq's par...Khan's parents came from and yet, you know, despite everything, this is a city...and in the words of one editorial...'enlightened enough' to vote for a man of that heritage nonetheless. So you don't want them to mention it at all and yet this is now...this is a ball that's rolling all over the world.