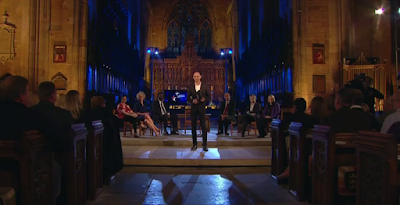 The latest piece looks at how the language used by various newsreaders and reporters 'amplified' the dire warnings of prominent Remain-supporting figures (from Sir John Major to Mark Carney and Christine Lagarde). Stress was placed on how powerful and influential these people are. Significantly less weight was given to Leave-supporting figures. Plus he arguments of the Remain-backing figures weren't analysed in any great detail, merely presented (at length).

Yesterday's piece reviews Tuesday's Newsnight. This was a problem I began trying to fisk but got lost under the sheer weight of detail that needed working through. David's piece looks at the first 'go to the audience' feature: a 3-1 pro-immigration selection of pre-chosen people, with Evan Davis cutting off the anti-immigration speaker before she could make her anti-immigration point. He then gives a thorough analysis of the bias in Chris Cook's report on immigration, the EU and Boston in Lincolnshire:

The guts of what he said was first to cast strong doubt on the idea that Brexit would allow changes in immigration policy; secondly that immigration had strongly benefited Boston; and third, that although there were pressures in Boston as a result of the influx, what it faced was unusual (or ‘extreme’ as he had earlier said).

I'd just add a few more 'snapshots' of my own here.

Firstly, I was very struck by the contrast in treatment received by the two politicians on the panel: Labour's David Hanson (Remain) and the Conservatives' Kwasi Kwarteng (Leave). I dreaded counting and timing things, then it struck me to look at the transcript and, perhaps, illustrate the difference with a couple of representative screenshots... 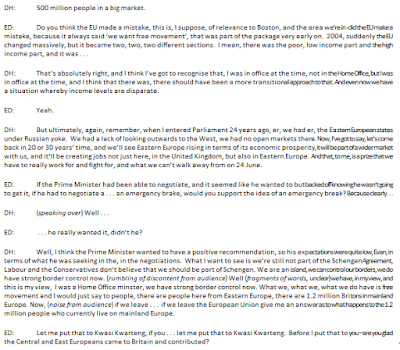 And now Evan and Kwasi Kwarteng: 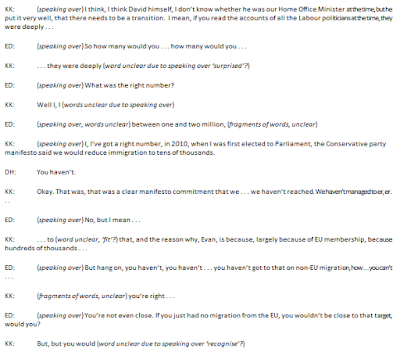 As you can hopefully see from that, Evan interrupted his pro-Leave politician much more than his pro-Remain guest. Kwasi barely managed to get a sentence out for much of the time.

Secondly, another pairing on the panel got rather different introductions from Evan (and Harriet is pro-Brexit):

Okay, we’ll come back to the audience in a minute.  But for now I just want to bring in two national figures: Harriet Sergeant, who's written two reports on immigration for the Centre for Policy Studies. And also here, Jonathan Portes of the National Institute of Economic and Social Research, he’s an economist, he is quite an expert on migration, and produced a report today on Brexit, migration and the economy...

Jonathan, economists generally mildly in favour of immigration, they don't exaggerate the benefits, by and large.  What was your report's sort of central conclusion? 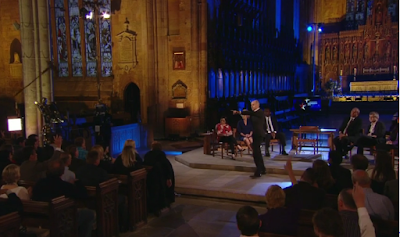 And thirdly, the two occasions where Evan publicly backed points from the audience were:

Audience member: I’m a foreigner myself, in a way, I’m from Yorkshire, but what’s to be said is the infrastructure is very poor and it’s not destined to cope.  I’m also a health professional, I’m a health visitor up until . . . I did two years working in Boston, finishing in December, and half of the births I att— . . . the newborn babies I saw were from Lithuania or Poland.  I do think immigration should be controlled. However, what I would like to say is that I’m disgusted by some of the attitudes that I see.  I’ve met lots of Polish and Lithuanian people, they’re the warmest, friendliest, hardest-working lovely people, and so I think . . . you know (applause)
Evan Davis:  A point well made, very well made, thank you.

Audience member:  The, the amount of migrants that work within the hospital and provide care, where we’re finding that governments are cutting numbers of doctors, number of British-trained nurses, we’re having to bring these people in to deliver care to British people, it’s an issue of policy rather than migration.
Evan Davis: That’s a very...that’s a very important point.

Small things perhaps, but they all add up (possibly).
Posted by Craig at 15:21