Ken Livingstone is on BBC Politics again defending the historical accuracy of his comments about Hitler. He says “any Jew will tell you that I’m right” and “It’s a pity that MPs don’t know their history”.

It’s interesting to watch the video of Ken on an Arabic TV station that’s been doing the rounds recently, in which he sets out his position on western interference in the Middle East. 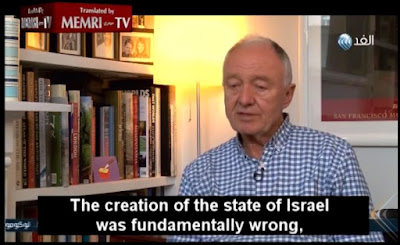 It does give one an insight into his thinking, but his theories about our disastrous interventions in Iraq and Libya and the creation of Israel feature one glaring omission.
He seems to have no interest or awareness of Islam.

You can easily look up some of his appearances on Press TV online.

This is true, deeply ingrained, antisemitism. It’s not about big noses. It’s a complete lack of empathy and a particular type of suspiciousness, which dehumanizes Jews and regards them as  ‘other’. It explains Jeremy Corbyn too.  It shows where they are both  “coming from”.
It certainly is a shame that so few people know history, especially those in the upper echelons of the BBC. (And those lower down the rankings)

The interviews are, again, slightly missing the point. Jo Coburn and Huw Edwards are out of their depth, so all they can chase from Ken is an admission of regret or an apology.
An apology they’re not going to get. “I was stating the truth, and some of my best AsaJew friends will back me up”

As for regrets, I have a few,


But then again,
too few to mention
I did what I had to do


And saw it through without exemption
Posted by sue at 16:42