I know the wide-angle camera lens can  stretch the image horizontally of anyone caught at either edge of the frame, but even so, it looks as if Jeremy Bowen has been eating as much as he’s been tweeting. 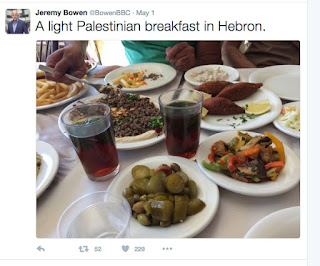 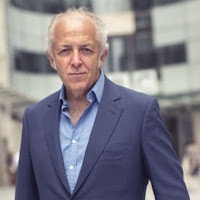 Four days in J'lem & W. Bank @BowenBBC; lots of photos: Palestinian children; Christian pilgrims; not a single Israeli who's not a soldier
— Yiftah Curiel (@yiftahc) 3 May 2016


There is absolutely no hiding Bowen’s biased attitude. The problem that runs through the BBC (like a stick of rock) is that they can’t accept that there’s a problem within Islam. If they can’t understand what antisemitism looks like in Islam, no wonder they don’t recognise it in the Labour party.
The always assume that the Palestinian people - or followers of Islam in general - are “just like us”

Have a look at the video of the infamous Jeremy Corbyn “friends” speech. The one with Hamas and Hezbollah. (H/T  H.P.)

If you can stomach the droning delivery, stay with it. This was filmed during a Stop the War Coalition rally in 2009. At that time Corbyn was a back-bench MP, so as many others have pointed out, he was in no position to have any influence on the peace process, even if one were to swallow his unconvincing claim that this was his sole intention for calling Hamas and Hezbollah his friends.

At the beginning, he announces that the Israelis won’t let Hezbollah travel, so, with regret, only Hamas has turned up.

“The idea that an organisation that is dedicated towards the good of the Palestinian people and bringing about long-term peace and social justice and political justice in the whole region should be labelled as a terrorist organisation  by the British government is really a big big historical mistake.”

Not as much as the historical mistake of electing him as leader of the Labour Party.

There is some rare footage of him laughing. But it’s a mirthless sound.
He talks about the folly of labelling - using the term ‘terrorist organisation’  which is something the BBC would approve of.

“The Palestinian people lived - well- all over Palestine. Israel was established in 1948, they were driven out. Into Gaza. Mostly. The West Bank, or scattered to the four winds all over the world. They’ve stayed, fundamentally, together with that dream, of returning home. That dream of being able to live in Palestine.

I go to Palestine quite often, and I just feel this sense of desperation and anger when you see the checkpoints (You can hear him banging in time to his own beat now) the roadblocks, the wall, the settlements, and the humiliation of Palestinian people, day in and  day out. And then we’re all full of what happened in Gaza in January when 1,500 people were killed including 400 children were killed during that Israeli military activity.

Think back two years to what happened in Lebanon!

Think back! The siege of Jenin!

Think back!The building of the walls!

Think back! The Palestinian parliamentarians and others that are in prison!

Think back! To Sabra and Shatila.

We .. are opposed to Zionism. What Israel is doing towards the Palestinian people. But we’re opposed to them from a point of view of unity.All our marches have involved very substantial Jewish contingents, and they always will. because - the argument -  because we refuse to be dragged into this - because we’re pro-Palestinian we’re antisemitic. it’s a nonsense.

What we’re in favour of is a Palestine where everybody can live. They can’t live if you’ve got Zionism dominating it all.

There’s more. A crecsendo, in fact.

The whole point is that Corbyn wants a one-state solution because he doesn’t recognise antisemitism. He doesn’t know the truth about the religion of peace. He doesn’t want to know what Islam really is and he doesn’t know what antisemitism really is. How could there be ‘a Palestine where everybody can live’ when the Palestinians are hell-bent on eradicating Jews? The Palestinians don’t even want a Palestine where everybody can live. They’ve turned down several offers of just that, because they simply don’t want ‘everybody’ to live there.

As it happens, one could easily point out that if Corbyn is so emotionally connected to the Palestinians’ dream of returning home (which, in many cases is Egypt, Jordan etc., ) why is he so unmoved by similar dreams that happen to belong to Jews? Why can’t these fools understand why Jews need Israel, when they are the very ones helping to bring about a situation where that need will become urgent.

“Scattered to the four winds’ was the term he used about the Palestinians, ‘dreaming of being able to live in Palestine’. Well, they shouldn’t have tried to prevent Jews from realising similar dreams.  If they hadn’t hated Jews so much they wouldn’t be in such self-inflicted misery.

Most of the Guardian/ BBC coalition will be no better informed than Jeremy Corbyn. Even Jeremy Bowen, the aerated version, who spends so much time in the region, gobbling down Palestinian breakfasts sees Palestinian Muslims as ‘just like us’.
Even though things have moved on since Bowen’s girth matched that of his Twitter image he doesn’t get it. The BBC doesn’t get it. 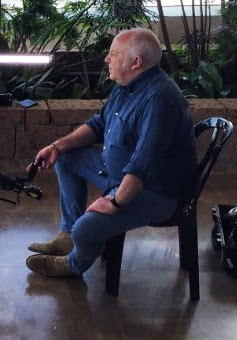