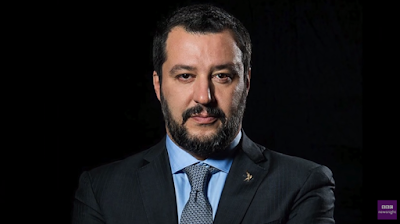 John Sweeney pronounced himself "uneasy" about the rise of Matteo Salvini in Italy on today's edition of From Our Own Correspondent.

In the green hills above the Tyrrhenian Sea the air hangs heavy and low. In the distance lightning crackles, thunder rumbles and the wind lifts flaps of corrugated iron. The racket brings a false sense of life back to the old abandoned brick kiln. From the look of things the factory went bust a decade ago, maybe more.

Calabria is the poorest province of Italy, poorer than Sicily just across the Strait. It's under the thumb of local mafia known here as the 'Ndrangheta. After the factory was abandoned it was used to dump chemical waste but no-one has been convicted. Perhaps the mafia had a hand in the dumping, perhaps not, but it's the man that some believe bears the ultimate responsibility for another crime in the old brick factory who's making the news. Earlier this month Soumaila Sacko, an African from Mali, came here to loot some corrugated iron to make roof for his home in a nearby shanty town. An Italian opened fire and Sacko was dead. A man has been arrested but denies killing him.

Sacko's  murder is fast becoming a cause célèbre because many, especially on the Italian left, blame a politician for creating a new mood of hostility to African migrants. His name is Matteo Salvini and he is the coming man of Italian politics. Dark-haired, deep-voiced, bearded, Salvini is the country's new interior minister - a populist firebrand for the hard right League and, it just so happens, a senator for Calabria. 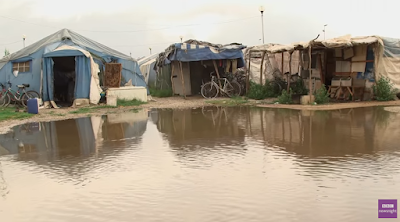 We went to the unofficial migrant camp where Sacko lived. It's a glum place, huge puddles on the ground. One man told us, "It's not easy. We hear many things from Salvini. Some people say we're going to be sent back. We don't know what to expect." "Does that make you afraid?", I asked him. "Yes it does", he said.

The local mayor is a former Communist. He wrestled with honouring Italy's tradition of hospitality with how his voters feel about the migrant shanty town. He blew hot about Salvini's denial of human rights but seemed well aware that the interior minister has been shooting up in the polls. "Has the shanty town been a recruiting sergeant for Salvini?", I asked. "Yes", he said.

In Villa San Giovanni, the port immediately across the Strait from Messina in Sicily, I met Francesca Porpiglia, a councillor for the League and a devoted follower of Salvini. She took me for a drive around town and told me that groups of young people of colour hung around in bars making other people, especially women, feel unsafe. African migrants, it turned out, are like London buses. There's never one around when you want one. Eventually, after two laps of the town centre, we found three. They seemed to me to be doing no harm. I put it to Francesca that some say that Salvini is a bit of a fascist. She laughed and replied, "No, no. I believe that the concept of right and left as it was understood in the old days doesn't exist any more. It's an obsolete concept". Maybe. 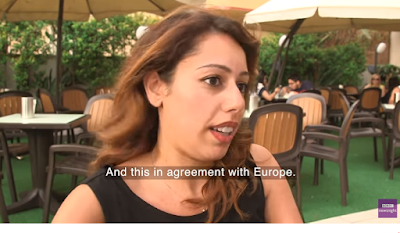 This week Salvini called for a national census of the Roma in Italy adding that the country would "unfortunately" have to keep its Italian Roma. On the migrant crisis he uses language like "Stop the invasion" and "our people come first". You get the drift. He's been photographed with our own Nigel Farage and on the continent he's made friends in all the hard right places, going on a platform with France's Marine Le Pen and Geert Wilders from the Netherlands. When Salvini went to Moscow he wore a Vladimir Putin T-shirt. Doesn't everyone? Salvini is against Russian sanctions. He's anti-euro, anti-Brussels and anti Europe's post 1945 settlement.

His success means that he's knocked to the grand old man of the Italian right into the shade. Spare a thought for Silvio Berlusconi. Say what you like about the old cruise ship crooner - he's a slimy crook in bed with the Mafia for example - but Berlusconi liked to be loved. Salvini gives the impression that he likes to be feared.

I love Italy, and in particular I love its easy-going anarchy - the idea that whoever is in power will find it hard to do much. But it's difficult to watch the passionate intensity of the Salvini devotees like Francesca and listen to the familiar pieties of the people who oppose him without feeling...how shall I put this?...uneasy.
Posted by Craig at 14:14

Labels: 'From Our Own Correspondent', John Sweeney