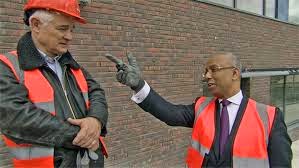 The BBC isn't exactly covering itself in glory at the moment, impartiality-wise, but it's always right and proper for a blog like this to pay credit where credit is genuinely due.

This piece of credit-paying comes courtesy of Douglas Murray at the Spectator and goes to one particular BBC reporter, Panorama veteran John Ware, for his exposé of Lutfur Rahman's misrule in Tower Hamlets:

The other person who deserves credit is the BBC’s John Ware. The BBC gets a lot of flak these days as well, but John Ware is the sort of reporter that enemies of the license fee should think on. At Panorama, among other places, Ware exposed the corruption going on in Tower Hamlets when central government was wholly missing in action. It was Ware’s Panorama on the corruption in Tower Hamlets that bounced Eric Pickles into ordering an audit of the council’s activities, and it was this that has now directly led to the judgement in court.

Another of John Ware's Panoramas - The Battle for British Islam - was similarly brave and uncompromising. At the time we called it "an outstanding piece of reporting". It went places the BBC very rarely goes.

His 'rarity value', however, does rather make him the exception that proves the rule, doesn't it?
Posted by Craig at 19:13