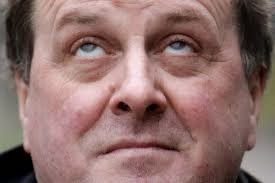 Talking of Nigel Farage and his HIV comments...

James Naughtie certainly ripped into UKIP's Steven Woolfe about them on this morning's Today (beginning around the 1.17.40 mark).

If you want a textbook example of 'hostile interviewing', this was probably it: lots of interruptions, a very unfriendly tone and no helpful questions whatsoever.

(It's the second such interview on Today so far this week, following Mishal Husain's less-than-friendly encounter with Nigel Farage yesterday.)

In contrast, today's other 'Jim interview' was with Lord Ashdown, speaking as the Lib Dems campaign chief, and that was a pretty good-natured affair from start to finish.

But if you really want to hear a James Naughtie interview that comes close to being the 'textbook' opposite of his 'hostile interview' with Mr Woolfe, then please try his interview on Wednesday's edition of Today with Labour's Jim Murphy (beginning around the 2.08.09 mark).

There, despite the odd faint sop to the idea of asking a slightly difficult question, Jim largely pulled back and let his Labour Party guest get away with absolute murder. I wouldn't be surprised if he'd put his slippers on and poured himself a fine 20-year old single malt before doing the interview, so hand-off did it become. (No wonder the cybernats were unimpressed).

Or to put it another way, his UKIP interview contained more than 4 times more interruptions per square yard (so to speak) than his Labour Party interview, backing up the idea that it was a much tougher interview.

The last time I used 'interruption coefficients' was in the period leading up to the last general election. Maybe I should bring them back for this one.

Looking back at my 2009-10 spreadsheets, I monitored 116 interviews by James Naughtie. His statistics were among the most (apparently) biased.

Of his Top Ten (i.e. his highest scores - the interviews containing the highest concentration of interruptions) nine were with Conservative politicians and only one was with a Labour politician (and this, if you recall, was when Labour were in power).

Of the 32 interviews where he didn't interrupt once (i.e {probably} the softest interviews), 17 were with Labour politicians, 8 were with Lib Dem politicians, 2 were with Conservative politicians, and the rest (with one each) went to UKIP, DUP, Sinn Fein, the Speaker and an independent (pro-NHS) MP.

It might be interesting to keep watching his interviews during this election period to see if a similar pattern emerges.
Posted by Craig at 21:16