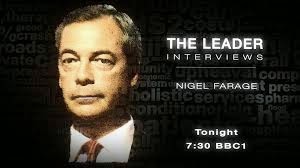 Anticipating tonight's BBC One Evan Davis leaders' interview with Nigel Farage on an earlier thread, well, we certainly had our hopes of something that wouldn't be the usual sort of BBC interview with the UKIP leader:

Anonymous, April 2015 at 01:02
That will indeed be interesting! He might well go for some detailed querying of UKIP's spending proposals/budget cuts as economics is Davis's strong point. Also, expect some detailed scrutiny of the Australian style points system for immigration.

Craig, April 2015 at 17:52
A good, tough examination of UKIP's policies would be worthwhile. It would make a change from the usual 'Today'-style interviews with Nigel Farage which tend to focus on his party's dodgy candidates and accusations that the party is racist.

Alas, our hopes were dashed.

Evan Davis spent less than 3 minutes on UKIP's spending proposals/budgets, merely contenting himself with interruptions asking where the money's coming from...

....and that was pretty much it about UKIP's manifesto - despite a passing mention of some 'pro-posh people' UKIP policies near the start....

And, yes, Evan Davis did do "the usual 'Today'-style interview with Nigel Farage which tends to focus on his party's dodgy candidates and accusations that the party is racist".

Taken all in all, some 16 minutes was devoted to questioning the "tone" of UKIP's rhetoric, especially about immigration and Muslims - i.e. over half the interview.

The very clear imputation from Evan Davis throughout this long section - though Evan was very careful not to use the word - was that, yes, Nigel Farage and his party are racists.

Nigel Farage strongly protested at several points that Evan Davis's had his facts wrong and that he was being misquoted and smeared. Several of Evan's lines of attack will, therefore, need a severe fact-checking. Given what befall Andrew Marr, they had better be correct for the BBC's sake.

The other main line of questioning concerned whether UKIP is a posh, establishment party. Evan had a list of posh UKIP candidates at hand.

Twitter has gone wild tonight with UKIP supporters - and people saying they aren't UKIP supporters - describing this as a disgracefully biased interview, one of the worst they've ever seen. Their opponents, outnumbered for once, are either gloating or claiming that Evan Davis was only doing what he ought to have done and that there was no BBC bias here at all.

I'm with the former group.

Interruptions-wise, Nigel Farage has definitely come off worst so far, easily beating all of the other party leaders by my reckoning: