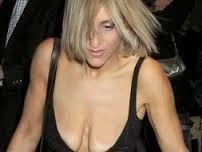 At the start of last night's Newsnight, Emily Maitlis (above) provided a textbook example of the dark art of skewing someone's words to cast them in the worst possible light (see pictorial equivalent, above).

The 'someone' being skewed just happened to be the leader of UKIP.

During his Evan Davis interview on BBC One, Nigel Farage said that he had used rhetoric on issues like immigration to "wake people up":

Sometimes you have to say things in a way to get noticed, of that there's no question.

Here, however, is how Emily skewed his words last night:

He admitted to Evan Davis that he had used 'a tone' to attack some immigrants which was designed to 'get noticed' but insisted it had been necessary.

That makes Nigel sound very nasty and shifty, doesn't it?

It isn't what he actually said, but what the heck? Eh, Newsnight?