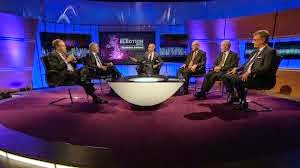 Sorry, but more election-related matters remain on my mind...

Please imagine (if you can) that the BBC's socially conservative critics are correct about the BBC having a strong liberal bias, socially-speaking, and that the corporation - as they claim - holds social conservatives in disdain (institutionally-speaking).

How, do you think, would such a biased BBC treat social conservatives, as compared to social liberals, in, say, a party political debate?

Would the BBC interviewer, by instinct, challenge/interrupt the socially-conservative politicians much more than than socially-liberal ones if the debate turned to social values?

Having thought about that, please also imagine that one of the BBC's flagship current affairs programmes - say Newsnight - was hosting a general election leaders' debate from Northern Ireland.

What would you expect that programme - going off its own agenda rather than that of voters - to ask those five leaders about? The economy, maybe? Immigration? Housing? Defence? The peace process in Northern Ireland?

You would expect those sort of subjects, wouldn't you?

What then would you think if that BBC debate - hosted by a gay presenter - instead of focusing on such issues, chose to focus instead on gay rights and same-sex marriage above anything else?

Would you think, 'Oh, that's a liberal-leftie BBC programme arriving, out of the blue, in the most socially conservative part of the United Kingdom and going with something that really bugs the English liberal-leftie mindset?', or would you think, 'That's an entirely reasonable focus for the one-and-only five-party election debate in Northern Ireland on BBC Two'?

Well, please imagine no longer. Such a BBC programme already exists: last night's Newsnight, where Evan Davis hosted a debate featuring the five main Northern Irish political parties - the DUP, Sinn Fein, the SDLP, the UUP and the Alliance - and, yes, he spend the first half of it focusing on gay rights in Northern Ireland (as opposed to much-more-liberal England).

Would it also surprise you, on learning that, that the spokesman (Nigel Dodds) from the most socially conservative of the five represented parties, the DUP, received more interruptions (and hostile questioning) that all of the other four guests (including someone from Sinn Fein) put together?

Well, knowing the BBC, it certainly doesn't surprise me. (And I'm quite the social liberal).

You may (like me) be much more 'progressive' on social matters than Mr Dodds and the DUP, but should he and his party really be subject to much more challenging interviewing, from a supposedly impartial broadcaster, simply because of their social conservatism?...

...especially if all of their political opponents (including Sinn Fein) receive significantly less challenging treatment?
Posted by Craig at 23:02