End of the debate? 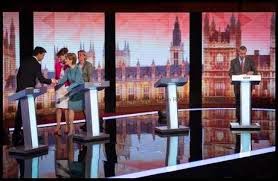 Before I leave the subject...

I must note that others have put forward points that readers familiar to this blog will doubtless already be well aware of - points we've (repeatedly) endorsed in the past (in connection with BBC One's Question Time)...

Doublethinker and John Anderson, commenting at Biased BBC, made the same point that people like Janet Daley and Nigel Farage have previously made (over the past couple of years):

Doublethinker: As to the bias of the audience there are only two explanations, either it was selected with a large far left bias, or those who weren’t leftists were cowed into silence for some reason or other. Perhaps being at a BBC event makes non leftists fearful.

I am now thinking that the PM will get a very rough ride when he appears on Question Time shortly. Even if a few Tories have slipped into the audience they will be terrified into silence by the leftists surrounding them who no doubt will bay for his blood and scream their support for the Mad Marxist.

John Anderson: Yes all the noise in the audience came from lefties. But on several occasions it looked as though a lot of people in the audience were not joining in the applause for leftie nonsense, they were just sitting on their hands.

I suspect Doublethinker's prediction that the forthcoming Question Time will turn out to be a rough ride with the BBC audience for David Cameron will prove to be right.

And John is certainly correct to say that - re-looking at it - a lot of the audience last night did appear to be sitting on their hands.

This, as I've said before, is a problem the BBC really needs to tackle, though I'm not sure how. It afflicts episode after episode of Question Time, and results in the appearance (if appearance it be) of a massive bias.

And last night it may have further discredited the corporation with a swathe of licence fee payers.

Rod Liddle at the Spectator (about to vote Labour again, unless his hand slips in the election booth), makes a characteristically trenchant point which reinforces this line of argument:

I thought Farage was rather good in that debate yesterday. It’s about time someone stuck it to the bovine, self-important, audiences – it takes a bit of guts to do that. My suspicion is not that the audience was unrepresentative (although it often is in these shows) but that the liberal left simply will not listen to views with which they disagree and feel a childish need to boo. It is the mindset which insists not that other people may be mistaken, but that they are foul for having the views they hold and should be subjected to spite and nastiness. As you are aware, I hate these totalitarian people and – pace my earlier blog – yes, I do understand that a large proportion of them are Labour supporters.

Another explanation espoused at the Speccie, from Ross Clark, is that the audience was engaging in groupthink (another Orwellian term) resulting from the 4 Left v 1 Right bias of the 'contestants': If all but one speaker was saying roughly the same (left-wing) thing then the audience might, lemming-like, follow them over the (left-wing) cliff {not, I feel the strong need to say - and putting my scientific hat on - that lemmings actually behave like that at all}.

This explanation, I think, would only work, however, if conjoined with the 'intolerant lefties silence shy righties' theory outlined above.

The fact remains that there was something seriously wrong with that studio audience last night. (Even quite a lot of gloating leftists on Twitter seem to have recognised that). The BBC may be officially 'intensely relaxed' about that, but a good portion of its audience isn't....

....and a truly impartial BBC, rather than imperiously brushing off all complaints, would surely seek to tackle the problem. Wouldn't it?

Update: According to the Daily Mail:

Yesterday the BBC refused to disclose how many people had complained about its broadcast.

‘Our data shows the number of audience contacts were heavily influenced by the issue being raised during the debate and therefore we won’t be giving out figures,’ a BBC spokesman said.

John Hemming, Liberal Democrat MP for Birmingham Yardley, said the BBC’s behaviour was ‘ludicrous’ and its refusal to publish the number of complaints ‘added insult to injury’.

The BBC has, of course, being tardy about answering questions over this from the very beginning. They had to be forced into it. Also according to the Daily Mail:


The BBC initially refused to disclose the political make-up of the audience but eventually released figures late yesterday. Of the 200-strong audience, about 58 were Conservative or Ukip supporters while about 102 backed left-leaning parties – Labour, the Lib Dems, SNP, Plaid Cymru or the SNP. The rest – 40 – described themselves as undecided.

The BBC told ICM to make sure a fifth were so-called floating voters, and for every five Labour supporters in the room, it made sure there were five for the Conservatives, four for the Lib Dems, two for the Scottish National Party, two for the Green Party and one for Plaid Cymru.

The figures suggest supporters of the Tories and Ukip were significantly under-represented.

Conservative MP Andrew Percy said: ‘The audience should reflect the opinion polls and the fact is that nearly half of the country say they would vote Conservative of Ukip’.

The Daily Mail writer makes that look worse for the BBC (unintentionally no doubt) by forgetting to include UKIP in those figures! The Daily Telegraph, more accurately, writes,


About 20 per cent of the audience were undecided. Of those who were decided there were five Conservative voters for every five Labour, four Lib Dem, three Ukip, two SNP, two Green and one Plaid Cymru voter, the BBC said.

and then adds what seems like a mitigating factor:


An ITV spokesman said the audience for its seven-way debate reflected the same proportions.

Anyhow, even if there were 3 UKIP members of the audience for every 2 SNP supporters and 5 Conservatives for every 5 Labour supporters, the question still remains as to why the SNP supporters seemed to outnumber the UKIP ones and why those '58 right-wing people' (one-third of the partisan part of the audience) made little or no noise during the debate - in complete contrast to the '102 left-wing people' (two-thirds of the partisan part of the audience) who most assuredly did....assuming, of course, that ICM succeed in translating the above ratios into actual people who genuinely hold those views and really do support those parties.