The latest stooshie over BBC bias 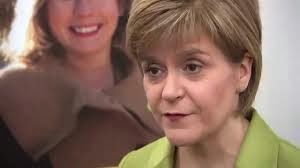 As this is a blog about BBC bias, something probably ought to be said about the big 'BBC bias' story of the week (well, at least according to some) - i.e. the latest onslaught of accusations hurled at the BBC in recent days by supporters of the SNP.

The first major set of accusations came in the wake of ITV's leaders' debate.

The cybernats took to Twitter en masse (as they tend to do) to complain that the BBC wasn't (pace Handel) seeing the conquering heroine (Nicola, Queen of Scots) come.

To paraphrase (in less than 140 characters):

"Everyone knows that Nicola Sturgeon wiped the floor with the rest of them, so why oh why isn't the *#$%ing biased BBC acknowledging that fact? #bbcbias".

As my own survey of some of the BBC's reporting of the debate clearly shows, the BBC was, in fact, very far from shy about acknowledging Nicola Sturgeon's "triumph".

The first BBC One news bulletin (News at Ten), mere minutes after the debate ended, featured the BBC's deputy political editor unambiguously declaring her the winner, and BBC reporters - from Allegra Stratton to Julia MacFarlane, from John Pienaar to Norman Smith - were almost falling over themselves to back him up.

Therefore, to be blunt, such complaints from SNP supporters are total rubbish.

The second major set of accusations came in the wake of the Telegraph's reporting of a leaked email which the Telegraph reported as showing Nicola Sturgeon favouring David Cameron as UK prime minister over Ed Miliband (in a leaked memo, apparently written by a "senior civil servant", reporting the new French ambassador's conversations with Scottish figures including the First Minister.)

The cybernats are furious at the BBC for paying attention to what they saw, at worst, as something akin to the Zinoviev Letter (i.e. a fake document, possibly devised by the security services, intended to damage a political party) and, at best, as worthless and wrong tittle-tattle. (Sky, who also majored on the story, don't seem to bother them at all.)

Typically, things got extremely vitriolic - so much so that Fraser Nelson of the Spectator clearly felt the need to step in and say 'Calm down! Calm down! (though in a Scottish rather than a Scouse accent) in defence of a BBC reporter, James Cook. James has (from the sounds of it) been on the receiving end of a staggering amount of particularly bilious bile from the cybernats - something Fraser calls "hounding" - simply for reporting the story. (Nicola Sturgeon, to her credit, also called for the attack dogs to return to their kennels.)

I have to admit, however, that I can see where the cybernats are coming from with some of the BBC (and Sky reports) I've seen, heard and read - such as yesterday's coverage on PM  - and with the Telegraph's reporting.

Putting aside the conspiracy theories for a moment, it does seem obvious to me that the Telegraph spun the 'leaked memo' by failing to emphasise that the writer of the memo himself cast doubt on whether Nicola Sturgeon would have really made such remarks and whether what she actually said has been "lost in translation" - and that's even before the emphatic denials from all and sundry (including the SNP and the French)...and I have noticed some BBC reports that have completely failed to reflect that.

However (and this is a complicated story, so a few 'however's are only to be expected)....

I also saw the BBC News Channel's paper review (on the night the story broke) where presenter Martine Croxall and a journalist from the Economist jointly poured cold water on the story - and rather blatantly relegated the sports writer from the Telegraph (who, rather unconvincingly, tried to defend his paper) to the sidelines....

....and James Naughtie went a considerable way out of his way on yesterday's Today to pour even more cold water (with bucket loads of ice) over it too. (And Jim isn't a favourate of the cybernats, to put it mildly. They think he's a Labour stooge. {Ed - and they aren't alone it that!})

Now, I've tried to make sense of all of this. Whether my take makes sense, however, I'll leave you to judge.

Update (h/t Guest Who, Biased BBC): James didn't just have the cybernats to contend with:

They were nice people but my goodness did they detest us Tories #SNP - so @BBCJamesCook IMO should not assist Labour with 'unnamed sources'
— Louise Mensch (@LouiseMensch) April 4, 2015

.@LouiseMensch The difference between us, Louise, is I'm not interested in who I'm "assisting". I just report what I know to be true.
— James Cook (@BBCJamesCook) April 4, 2015

@BBCJamesCook I don't think you do, no. Unnamed and unverifiable "sources" tell you something massively damaging to the SNP?
— Louise Mensch (@LouiseMensch) April 4, 2015

@BBCJamesCook in an election campaign, unless you can verify this with a named source it is wrong to "report" it.
— Louise Mensch (@LouiseMensch) April 4, 2015