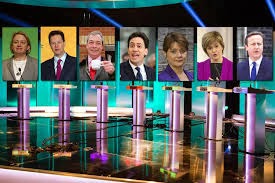 I rather enjoyed it. (I'd expected to be bored rigid, but wasn't.)

What follows are a series of preliminary reactions...markers to test out the BBC's response to the debate.

First things first: ITV newsreader Julie Etchingham did a good job of controlling the seven party leaders (and disguising herself as Anne Robinson from The Weakest Link probably helped), and the audience were largely un-BBC-like in remaining quiet for most of the programme - though half of the four spontaneous outbursts of applause went for criticism of Nigel Farage (which was somewhat 'BBC-audience'-like, wasn't it?).

I don't think any of the seven leaders bombed. Even Natalie Bennett of the Greens avoided humiliating herself.

That said, as I was watching, I found it hard to tell who was winning, and I think it's safe to say that no one won outright.

I've really racked my brains to try to put aside my own prejudices and think who is most likely to have won ITV viewers' hearts, so here are the results of the Morecambe jury...

I very much doubt the winner will be Natalie Bennett (too nice-seeming, too dull, yet far too extreme), Leanne Wood (charming, in a disheveled sort of way, but far too focused on playing the Welsh card) or Nick Clegg (personable, but damaged goods, and a bit of a one-trick pony on these occasions). I'd put them among the likely losers.

I thought David Cameron did OK, but seemed detached (probably intentionally). I suspect Conservative voters will feel quite happy with his performance though.

Similarly (despite my tendency to laugh at his inability to speak in anything other than platitudes and political cliches), Ed Miliband did OK too. He didn't make a bacon-sandwich-eating-disaster of it by any means. I suspect Labour voters will feel just as happy with his performance.

Neither the Labour or Conservative leader made much headway though. I doubt either of them will have won over any genuinely undecided voters, and I really couldn't say who did better.

Nigel Farage will, I suspect, have gone down a treat with people who like Nigel and have bombed with people who don't like Nigel. (I liked him). What the undecideds will think about his performance, I've absolutely no idea. The audience's reaction suggests a non-positive reaction, but (from experience) I don't trust studio audiences, however 'carefully balanced' they may be.

Nicola Sturgeon came across well. Unlike Leanne Woods, she made a play for the affections of UK voters as a whole and sounded like a capable leader. I suspect her performance will have done her no harm in Scotland, or in England.

OK, it's time to inspect the post-debate polls, and - to my relief - they are as confused as I am:

ComRes makes it a virtual 4-way tie, with Nigel Farage, David Cameron and Ed Miliband all on 21% and Nicola Sturgeon on 20%. Nick Clegg is on 9%, Natalie Bennett on 5% and Leanne Woods on 2%.

Survation gives the joint top spot to David Cameron and Ed Miliband (25% each), with Nigel Farage virtually tying on 24%, and Nicola Sturgeon on 15%. Nick Clegg is down on 6%, Natalie Bennett on 3% and Leanne Woods on 2%.

No one's a winner from all of that. Poor Leanne, however, is the clear loser (though she probably won't mind if that 2-4% of respondents are Welsh!)

That's the background. I'll monitor the BBC's coverage of it tomorrow. (Time for bed now). Will it be biased?

Drowsy Afterthought: Whether any of this sways many voters is a moot point. 2010 saw 'Cleggmania' as a result of these kinds of debates but, strangely, the Lib Dems actually lost ground at the election.

And did ITV engage in an act of masochism in programming this debate? Have its viewing figures plummeted? Who actually watched it? Me, Leanne's mum, Wee Eck, a couple of anti-fracking kangaroos, every UKIP supporter in the country, various (other) BBC bias bloggers, the media, party political activists, Justine, the Spanish lady and Sam Cam? Plus relatives of members of the audience (including the significant other of that hippy chick who got herself chucked out for heckling)?

Update (3/4): Here are the takes of the newspapers (the morning after the night before):

The Financial Times: No clear winner from UK election debate

The Daily Telegraph: Audience turns on Miliband as Sturgeon and Farage shine in heated leaders' exchanges

The Independent: A battleground for David Cameron and Ed Miliband but poll declares SNP leader Nicola Sturgeon the winner

The Daily Mail: Cameron dodges a bullet: PM escapes unscathed as 40% still think he is best choice to lead the country while Miliband falls flat and is overshadowed by Sturgeon and Farage in marathon TV debate

The Daily Mirror: Miliband riding high after narrow victory in the TV leaders debates as Cameron is hit for six

The Sun: Oops! I just lost my election. Miliband blows his chance on TV


P.S. Here's the verdict from the political editor of Sky News, Faisal Islam:

The insurgent parties are here to stay.
And without doubt the standout winner of today's historic seven-way debate was Nicola Sturgeon, the Scottish First Minister and SNP leader.
In terms of the polls she came out top, just, on average - and by eight points according to YouGov.


A Scrapbook of BBC reaction

On BBC One's News at Ten John Pienaar said that Ed Miliband "outperformed expectations" and that David Cameron could "go away with some satisfaction". He thought Nigel Farage's performance would likely be "polarising" because of his "aggressively polarising politics". On Twitter he writes: "Sturgeon - little known across much of the UK outside Scotland - more than holding own in heavyweight company. Debate has worked for her."

Also on BBC One's News at Ten James Landale declared Nicola Sturgeon the winner and said that Labour would be "less content" with the outcome as a result.

Nick Robinson, writing on his blog, is more non-committal but hints that Nigel Farage may have done best. He thinks the leaders of the three main parties will have felt they "achieved" their purposes.

On Newsnight, Allegra Stratton said that "the big teams" had "quite a good night" and that there's "chaos" in the polling. She said that David Cameron didn't do "quite as much as he might have done" and that Ed Miliband that Ed Miliband didn't do "particularly brilliantly either". She felt that Nigel Farage and Nicola Sturgeon were the one who "scored" the points they wanted to and that Nicola Sturgeon will get the headlines - which will be better news for the Conservatives rather than Labour.

The instant responses from Newsnight's regular 'swing voters' focus group produced a different (and somewhat unusual) winner: Natalie Bennett, who got 4 votes compared to David Cameron's 3. Nick Clegg and Ed Miliband got 1 vote each. They didn't reckon much to Nicola Sturgeon. No one mentioned Leanne Woods or Nigel Farage. Quite who they were representative off is anyone's guess.

The BBC News at Ten's employed another group of 'undecided voters', as well as Ben Page of IPSOS Mori and 'the worm'. The results were that all of the 'big three' party leaders had some success, though Ed Miliband sometimes struggled to reach the audience more than the others. Nigel Farage didn't reach the heights that had been expected of him, and did less well than David Cameron and Nicola Sturgeon. who "will be very pleased" at some of the reaction, according to Ben Page. The rowing didn't go down well with the voters, apparently.

Julia Macfarlane retweeted Ed Miliband
But why didn't @Ed_Miliband say this during #leadersdebate?
I want to say, Nigel Farage's comment about the NHS and HIV was disgusting. He should be ashamed. The fact he isn't says so much.

This morning's Today heard Norman Smith giving his verdict. He said "those with most to smile about will be the smaller parties, in particular the women, and most particularly Nicola Sturgeon." He felt she pitched herself as a UK-wide politician "appealing to a much broader base". He said the Conservatives and Labour did OK but "personally, I thought at times Ed Miliband at times maybe tried a little bit too hard to appear prime ministerial, maybe some of the lines were a little too scripted", and his "authenticity" didn't quite come across. As for Nigel Farage, well, Norman felt he was only speaking to his base and doesn't think his "controversial" messages would "reach out beyond that", adding "and I suspect David Cameron and the Conservatives will actually be quite comfortable with Mr Farage's performance last night".
Posted by Craig at 23:57