Sorry, but a long post is necessary here to show the difference in reporting a 'breaking news' story this afternoon between the BBC News website and The Times (online).

The Times, in its account, brings out the religious - i.e. specifically Muslim - angle to the story of Lutfur Rahman and his corrupt mayoralty of Tower Hamlets.

Here is that Times account in full (and sorry for breaking the paywall, just this once).

I've highlighted in red the passages that relate to this Muslim angle and underlined the use of all words containing (in some way) 'Muslim' or 'Islam'. 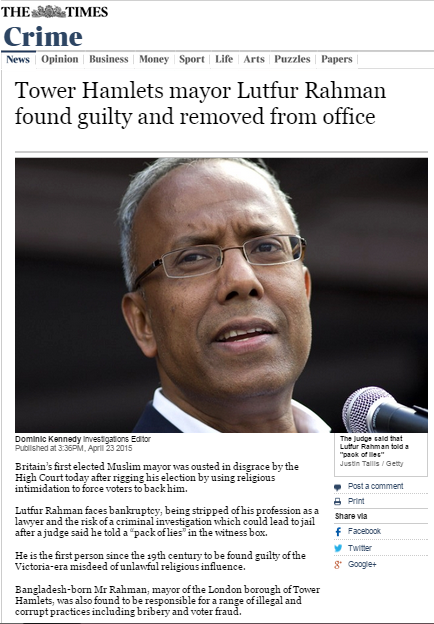 Britain’s first elected Muslim mayor was ousted in disgrace by the High Court today after rigging his election by using religious intimidation to force voters to back him.
Lutfur Rahman faces bankruptcy, being stripped of his profession as a lawyer and the risk of a criminal investigation which could lead to jail after a judge said he told a “pack of lies” in the witness box.
He is the first person since the 19th century to be found guilty of the Victoria-era misdeed of unlawful religious influence.
Bangladesh-born Mr Rahman, mayor of the London borough of Tower Hamlets, was also found to be responsible for a range of illegal and corrupt practices including bribery and voter fraud.
Richard Mawrey, QC, the election commissioner, fiercely condemned politicians who create division by encouraging Muslims to see themselves as victims, dividing their communities from the rest of society and creating resentment among the rest of the population.
“The real losers in this case are the citizens of Tower Hamlets and, in particular, the Bangladeshi community,” he said.
“Their natural and laudable sense of solidarity has been cynically perverted into a sense of isolation and victimhood, and their devotion to their religion has been manipulated – all for the aggrandisement of Mr Rahman.
“The result has been to alienate them from the other communities in the borough and to create resentment in these other communities. It is the result of the ruthless ambition of one man.”
Mr Rahman bribed voters by taking public money from organisations, even the Alzheimer’s Society, and giving it instead to “lunch clubs” which served the Bangladeshi and Somali communities.
“The Bangladeshi community might have thought itself fortunate to have been the recipient of the Mayor’s lavish spending but in the end the benefits were small and temporary and the ill effects long-lasting. It was fool’s gold.”
The judge said the evidence indicated that the chairman of the council of mosques of Tower Hamlets, Shamsul Hoque, “had not told the truth” in the case. “Obviously a court will be very wary of disbelieving evidence given on oath by a cleric, especially a senior cleric, of any faith,” the judge said. “Sadly, the court was not able to treat Mr Hoque as a reliable witness.”


The four local voters who brought the election petition against Mr Rahman had argued that the mayor obtained the support of local clerics through his close relationship with Mr Hoque. “Though perhaps not in the same league as the Imam of Mecca, the Chairman is someone of considerable power and influence amongst the Muslim clerics of the Borough and to have him as an ally would be a trump card in Mr Rahman’s re-election bid.”
Mr Hoque led a list of 101 imams and scholars who wrote a letter in Bengali in a Bangladeshi community newspaper, six days before last year’s election, claiming the Muslim religion was under attack, its enemies despised and wished to humiliate Muslims, it was the duty of faithful Muslims to vote for Mr Rahman and only he would defend the mosques.


Mr Rahman’s chief challenger, Labour’s John Biggs, was falsely portrayed by the mayor and his supporters as a white racist who was encouraging the extremist English Defence League in the area. In fact, Mr Biggs had been the spearhead of the anti-racist movement in the borough since at least the 1990s.
All the evidence of corruption brought before the High Court had been uncovered by the four amateur members of the public who brought the petition and none by the police although Scotland Yard made much of its huge presence in the borough on polling day. The judge suggested that “an unkind person might remark that the policemen ... had appeared to take as their role model the legendary Three Wise Monkeys”.
The judge also found that all of the councillors elected for Mr Rahman’s self-styled “Tower Hamlets First” party last year were elected corruptly, although there appears to be no power to remove them.
The judgment instantly removes Mr Rahman as mayor and leaves the authority rudderless until a new election can be arranged.
Mr Rahman faces costs estimated at £1 million and the judge raised the possibility that he will be bankrupted.
The judge will also report him to the Solicitors’ Regulation Authority which can strike him off. The Director of Public Prosecutions will consider the evidence in the case, raising the prospect of a criminal investigation into the corrupted poll.
“On past form, it appears inevitable that Mr Rahman will denounce this judgment as yet another example of the racism and Islamophobia that have hounded him throughout his political life,” the judge said.


“It is nothing of the sort. Mr Rahman has made a successful career by ignoring or flouting the law and has relied on silencing his critics by accusations of racism and Islamophobia. But his critics have not been silenced and neither has this court.”

This aspect of the story - which the judge obviously felt was an important one too, given the quotes above, is one the BBC News website's account characteristically plays down...

...and in comparison to The Times, the BBC plays it down to a very striking degree.

Here's the BBC's account, similarly coloured and underlined. Judge for yourselves: 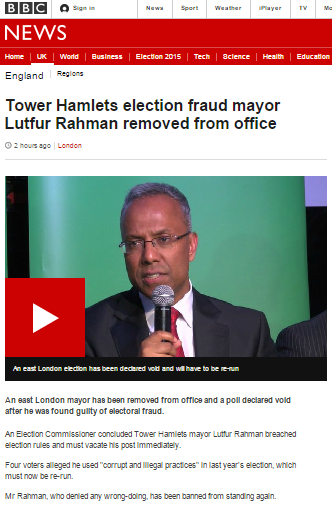 An east London mayor has been removed from office and a poll declared void after he was found guilty of electoral fraud.
An Election Commissioner concluded Tower Hamlets mayor Lutfur Rahman breached election rules and must vacate his post immediately.
Four voters alleged he used "corrupt and illegal practices" in last year's election, which must now be re-run.
Mr Rahman, who denied any wrong-doing, has been banned from standing again.
At the special High Court hearing, Election Commissioner Richard Mawrey also ordered Mr Rahman to pay £250,000 in costs.
One of Mr Rahman's aides Alibor Choudhury was also found guilty of corrupt and illegal practices.
Tower Hamlets First, Mr Rahman's party, said the judgement was a "shock" and it was seeking further legal advice in relation to a judicial review.


Mr Mawrey - who sat as a judge - said the mayor had "driven a coach and horses through election law and didn't care".
He added that Mr Rahman, who had been elected for a second term in the borough, would be "incapable" of standing in the new election.
In the Election Court judgement, Mr Mawrey said the effect of his ruling that Mr Rahman's election was void meant that that it was as if the election "had never taken place" and he had not lawfully been mayor since that date.
Mr Mawrey also added: "The evidence laid before this court... has disclosed an alarming state of affairs in Tower Hamlets.
"This is not the consequence of the racial and religious mix of the population, nor is it linked to any ascertainable pattern of social or other deprivation.
"It is the result of the ruthless ambition of one man."
Mr Mawrey also described Bangladesh-born Mr Rahman as an "evasive and discursive witness whose evidence was untruthful on occasion" and suggested he had played "race" and "religious" cards.
Mr Rahman ran a "ruthless and dishonest campaign to convince electorate his rival John Biggs was a racist", Mr Mawrey said.
After the ruling, Labour London Assembly member Mr Biggs said: "By setting out to break the rules and going to extraordinary lengths to win last May's mayoral election, Lutfur Rahman and his allies robbed the people of Tower Hamlets of the free and fair mayoral election they deserved and betrayed everyone in our community who trusted and voted for him."
BBC London's political correspondent Karl Mercer said it was likely that a new mayoral election would be held in June.


The group of voters who brought the action was headed by Andy Erlam, who stood as a councillor.
He said: "It is a fantastic result for democracy. There will have to be a new election of mayor. Mr Rahman cannot stand."
The four voters mounted the legal challenge under the 1983 Representation of the People Act.
Their lawyers made a series of allegations, including "personation" in postal voting and at polling stations and ballot paper tampering.
BBC News correspondent Sarah Campbell said the Election Commissioner had upheld a number of the allegations, including:
Lawyers for Mr Rahman, who was re-elected for Tower Hamlets First last May, described the claims as "invention", "exaggeration" and "in some cases downright deliberately false allegations".
However the Election Commissioner said that Tower Hamlets First was "never really a party but the alter ego of Lutfur Rahman".
The Election Judgement said Mr Choudhury, who was also found guilty of illegal practices, must immediately vacate his seat as a councillor and a new by-election must be held in the Stepney ward.
In a statement, Tower Hamlets First said: "Today's judgement has come as a shock - the Mayor strongly denies any wrongdoing and had full confidence in the justice system, and so this result has been surprising to say the least."
Communities Secretary Eric Pickles said the Election Court's judgement justified his decision to send commissioners into the council last year to take over some operations.
He said: "This judgement vindicates our action to intervene."
He added that the judgement against Mr Rahman could mean extra powers being handed to commissioners and added the Met Police "also need to take steps to stop further corrupt practices".
Mayor of London Boris Johnson said: "I'm very glad that justice has taken its course and that a cloud has been lifted from Tower Hamlets."

The contrast could hardly be clearer, could it?

BBC defenders might claim that the Times overplays the Muslim angle - though the judge's comments, the very rare 'unlawful religious influence' conviction and all the case-related detail The Times provides would make that claim untenable; but, even if we were to concede them that point, it would not in any way justify the BBC News website's almost total exclusion of that seemingly highly relevant angle.

The BBC also, as you will have noticed, completely omits the judge's comments about Lutfur Rahman's habit of playing the "Islamophobia" card. The quotes which end The Times piece are nowhere to be found in the BBC's article.

The BBC's account also fails to report the judge's criticism of the chairman of the council of mosques of Tower Hamlets, Shamsul Hoque, and his explicit use of a Muslim sense of grievance to drum up support for the deposed mayor.

As so often with these kind of stories, the BBC only reports half the story (if that).

The corporation's obsessive treading-on-eggshells when it comes to anything that might reflect badly on Muslims and, thus, potentially harm 'community cohesion' makes it censor stories like this to a ridiculous degree...

....especially, it has to be said, on the BBC News website. (Other parts of the BBC can be more candid).

Another day, another complaint then.

Update: Great thread on Harry’s Place about this. Here’s a PDF of the judgment. Catch it and read the comments before they’re obliterated,
Sue.