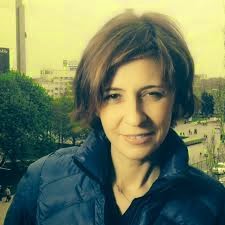 I've not had much time to follow BBC-related matters in recent days, but I did spot a post by Gene at Harry's Place which praised a familiar BBC journalist - namely former BBC Middle East correspondent Natalia Antelava - for a piece she did from Ukraine.

This admirably debunked Russian media claims that Ukrainian bombing resulted in the death of a young girl.

It certainly is a compelling piece of reporting and one that, on Twitter, has sent the Krembots into a state of malicious frenzy.

It's a shame, however, that Natalia's determination to expose Putiwood (as it might be called) never extended, in her former life, into exposing the similarly emotive fakeries of Paliwood in Gaza and the West Bank.

Maybe she'll go back there one day and do the right thing.