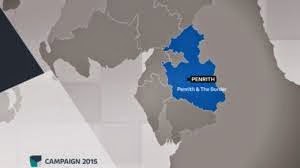 By a curious coincidence, both ITV News and BBC Radio 4's Today broadcast election reports from the same constituency with a day of each other this week.

That constituency was Penrith and the Border.

As that's both my childhood and my ancestral stamping ground, I was very interested in both reports.

ITV's report presents the Penrith and the Border - the most sparsely populated in England - in all its complexity.

Agriculture and tourism are key industries. Small businesses are everywhere, employing more than 90% of local people. Unemployment is almost non-existent, but wages are low. The constituency's remoteness is a concern - especially given the money that floods into Manchester and Scotland in comparison. Voters are worried about the neglect of rural concerns and the rate of VAT (they'd like to see it reduced). The young are worried about the economy, the environment and social justice.

Turn, however, to Matthew Price's report on this morning's Today and a far gloomier, much more monochrome picture appears.

Given that, as ITV reports, unemployment is very low in Penrith and the Borders, with less than 1% of people claiming Job Seekers Allowance, please see what you make of the opening of Matthew's Today report - which focused primarily on "the cuts":

There's a sound that echoes off the dry-stone walls around here less often these days. Its disappearance from the lanes is having a profound impact on school children, families, pensioners, workers. It's the sound of a bus that's no longer just about to arrive. The lack of that sound cost Peter Prudow his job. The council, facing budget cuts, stopped subsidising routes. The bus companies ceased operating less profitable buses. The 25-mile service from Peter's home in Kirkby Stephen to Poundstretchers in Kendal, where he worked, ended. Peter Prudow is the human cost of council budget cuts, isolated and on the dole.

The Women's Institute is taking action about "the cuts" too. Problems with high-speed broadband are annoying people. A land owners' representative says they feel isolated. A postmaster says politicians tell lies.

And that, basically, was that from the BBC: Cuts, unemployment, isolation, more cuts, broadband issues, lying politicians.

I think the ITV report was far more informative. The BBC report had the feel of a BBC reporter arriving with a pre-set story and telling it regardless.

Incidentally (as an aside), one of Rory Stewart's colleagues was less than impressed:

Inaccurate and prejudicial @BBCr4today just now on bband & rural issues in Penrith. Everyone knows @RoryStewartUK has been superb on these.
— Jesse Norman (@Jesse_Norman) April 11, 2015