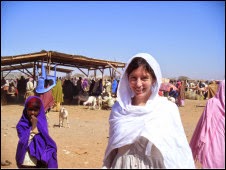 I'm not the BBC World Service's Africa Editor (no, really), and nor am I an expert on the Somali Islamist terrorist group al-Shabaab.

The BBC's Mary Harper, on the other hand, is both, and she was on Today this morning talking about the news that a well-off law student from Kenya was among the terrorists who carried out the latest al-Shabaab atrocity in Kenya.

Even though I'm no expert, some of her language struck me as unusual. Here's what she said [bold emphases added]:

What's surprising about the news is that this alleged attacker was obviously someone from quite a sophisticated background, studying Law, not showing signs of extremism. There have been several al-Shabaab recruits in Kenya, not just from the ethnic Somali population - which is very large in Kenya. They don't just live in Somalia - but also from other disenfranchised Muslims in coastal areas, parts of Nairobi and in the region where Garissa is. But this is the first time I'm hearing of an educated, sophisticated Kenyan, allegedly at least, joining al-Shabaab and carrying out this attack in Garissa.

His father, who reported him missing more than a year ago, is a local chief from this town called Mandera, which is right up on the border with Somali. And, interestingly, it's in Mandera where Kenya has proposed building a wall, a little bit like the wall between Palestine and Israel, to try to keep al-Shabaab out, because Kenya is so worried about al-Shabaab staging dozens and dozens of attacks in Kenya since October 2011, when it invaded Somalia. And I also think it's important to remember that even though it's these big attacks which hit the headlines, where al-Shabaab separates out Christians for killing, most of the attacks it actually kills Muslims in this border area with Somalia, but these don't really hit the international headlines.

There seems to be certain messages coming out of what she said there - all of them tending towards suggesting that the Muslims of Kenya have legitimate grievances.

Firstly, she states it as a given that many Muslims are "disenfranchised" in Kenya. ("Disenfranchised" in what sense though? Not allowed the vote? Neglected by the Kenyan government?) This seems to give them victim status.

Secondly, she seems to suggest that the Kenyan government's decision to build a "wall, a little bit like the wall between Palestine and Israel" in the town where the "alleged" terrorist came from might have some connection to the attacker's actions. For anti-Israel types, this could be heard as a "dog-whistle", inviting further 'understanding' for the "disenfranchised" Muslims of Kenya.

[Also, of course, her use of "Palestine" here runs counter to the BBC's editorial guidelines on the use of the term - as does her use of the word "wall" in "the wall between Palestine and Israel".]

Thirdly, she says without qualification that Kenya "invaded Somalia" in 2011 - which, obviously, makes Kenya seem like the aggressor. Even though I'm not an expert, I know that this is one of those hotly disputed matters which litter international affairs. Wikipedia gives the other side's take:

In October 2011, a coordinated operation between the Somali military and the Kenyan military began against the Al-Shabaab group of insurgents in southern Somalia. The mission was officially led by the Somali army, with the Kenyan forces providing a support role.

[Hmm, whom to believe more - Wikipedia or the BBC World Service's Africa Editor?]

Fourthly, she ends by suggesting that Muslims are (at least) as much the victims of al-Shabaab than Christians - a point she's also been keen to make elsewhere:

#KenyaAttack BBC's @mary_harper reminds us @BBCWorld not to forget Al-Shabab kills Muslims too - and is actively recruiting inside Kenya
— Philippa Thomas (@PhilippaBBC) April 4, 2015

and that these killings are unjustly ignored by the international media.

There does seem to be a strong 'narrative' behind Mary Harper's reporting here, don't you think?


For more on Mary Harper's work for the BBC, there's also a fascinating transcription of her From Our Own Correspondent piece about talking to al-Shabaab.

The terrorists are in regular contact with her, and a text message or call from an al-Shabaab terrorist on her mobile phone can come through at any time, in any place.

She seems to be one of the group's main foreign news organisation contacts (their go-to person), and there's obviously a degree of trust between them now, however abhorrent she may find some of their actions. One of them even wanted her to convert to Islam:

What started as an update on the latest attack on the Kenyan coast ended up as a lecture about my faith. “Have you thought about the afterlife?” asked the official. “You know, Mary, you won’t be around in 20, 30, 40 years time. I seriously recommend you consider converting to Islam.”

This man seemed genuinely concerned, as he urged me in a gentle voice to take up the Muslim faith.

The BBC clearly thinks this is all highly valuable, helping the rest of us to understand al-Shabaab's thinking. (Of course, one man's 'impartial reporting' is another man's 'passing on enemy propaganda'.) Her input is then fed into topical BBC articles - such as the BBC News website's main report into the Garissa atrocity:

Al-Shabab says it attacked the university because it is at war with Kenya, BBC Africa analyst Mary Harper reports.

Kenyan troops entered Somalia in October 2011 in an effort to stop the Islamists from crossing the long, porous border between the two countries and kidnapping people - but their presence achieved the opposite effect, provoking al-Shabab to increase its activity in Kenya, our correspondent adds.