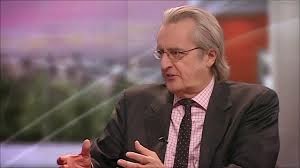 If there's one BBC presenter that everyone seems to like, it's Paul Lewis from Radio 4's Money Box.

Few people have a bad word to say about him, and he's someone who rarely, if ever, gets criticised for bias. He's a wonderful presenter, and a great credit to the BBC, and...

Evan Davis (interrupting): There's a 'but' coming, isn't there? What is it with you Paddington-hating bloggers and your hate-filled 'but's? Surely it's patriotic to be uncritical of the BBC?

But, yes, you're right for once. There is a 'but' coming, because Paul Lewis's interview with UKIP's economics spokesman Mark Hughes today provoked a certain amount of shock from UKIP supporters, both on Twitter (using the #bbcbias hashtag) and on BBC-bias-monitoring blogs.

Here's a representative exchange on the subject from Biased-BBC:

MartinWW
April 25, 2015 at 12:34 pm
Radio 4 – Moneybox. 25 April. Paul Lewis interviewed UKIP’s pensions spokesman at midday. One might have expected Lewis to have been his usual forensically-probing, but polite and even-voiced self. But, no. He was sharp-voiced, carping, hostile and argumentative and, furthermore, accused the spokesman of constructing policies to assist in his business. Lewis was more interested in finding fault than providing a fair platform for UKIP. Before this episode, I had considerable regard for Lewis, and it is sad that he reverted to the standard BBC stance towards UKIP.

Is this just sour grapes from UKIP-supporting commenters, or is there something in their complaints about Paul Lewis's behaviour today?

Well, it did seem to me to be an unusually sharp-toned interview from the Money Box presenter, though I have to say that I found it fascinating, and unusual - unusual in that it's extremely rare to hear a BBC interview that actually focuses on, and takes seriously, UKIP's policies, and is prepared to spend time digging into them.

All this is a preamble to a stocktaking piece about how we can actually prove BBC bias.

A complaint based on the tone of a BBC interviewer tends to get nowhere, as the BBC will simply argue that judgements about tone are highly subjective and that the BBC interviewer in question's tone will have struck many others as just fine and dandy.

The complainant could then trawl through all the recent episodes on the BBC i-Player and listen to them, noting the differences of tone.

In the case of Paul Lewis's previous election interviews - with Danny Alexander of the Lib Dems, Stewart Hosie of the SNP and Labour's Ed Balls - that complainant might well find (as I did) that they were all splendid interviews but that none of them was as sharp and combative as the interview today with UKIP's Mark Hughes.

Would saying so in a complaint to the BBC get them to 'fess up to BBC bias? Not a chance of it. It's still all subjective, they'd reply.

Here then, perhaps, is where statistics might come in.

Putting that old idea back into practice on these Paul Lewis interviews produces the following results:

That shows, if nothing else, that UKIP's Mark Hughes was interrupted almost twice as much, proportional to the length of the interview, as Labour's Ed Balls. And Stewart Hosie seemed to strike it lucky.

Now, the BBC would reply that all this proves is that the UKIP man was interrupted more than the Labour man. They would say (and I know this from personal experience) that this doesn't prove bias.

You might, if you're fanatical enough, try to cancel out that 'context' cop-out by monitoring over a thousand interviews and deriving averages for each political party.

By so doing you could derive, as I did for some eight months from 2009-10, a list showing (a) party, (b) the number of interviews monitored and (c) the resultant average 'interruption coefficient'.

In descending order, from highest (toughest) to lowest (softest) the following list duly appeared, showing UKIP and the Conservatives to have been interrupted much more than Labour, Lib Dem or Green politicians. (UKIP, you will note, fared worst of all at the hands of BBC interviewers, interruption-wise):

Of course, it was entirely possible that BBC Complaints would still refuse to accept interruptions as a credible measure to monitor bias. They could do so - and did - by the simple act of denying they are a credible measure.

I still think it is a highly suggestive and, if properly presented for checking, credible. (I posted details of every month's list on my old website). Maybe it should be brought back.

What counting interruptions lacks as a way of monitoring BBC bias, among other things (like a way of quantifying 'context'), is a set of complimentary measures.

Inspired by David Keighley (of News-watch fame), what if a second measure might be found in working out how much of the interview the BBC interviewer talks for and comparing it with the amount of time the interviewed politician speaks for?

That would be easy to do, readily re-checkable and hard to get wrong. And it would be very hard for the BBC to bring 'subjectivity' into it.

(Plus, if you're a political animal who loves listening to interviews, it would be no hardship. And it would give those interviews an extra, personal edge).

How would that work with Paul Lewis's interviews so far then?

That, as you'll doubtless have spotted, shows that Mark Hughes of UKIP got the 'toughest' interview and Ed Balls of Labour the 'softest' interview.

It also gives an extra edge to the relatively high 'interruption coefficient' for Danny Alexander, by showing that, in terms of the amount of time he got to talk, he didn't do too badly after all.

By those two measures - counting interruptions (and dividing them by the length of the interview) and working out the balance of dominance in the interview by measuring the length of time the two protagonists spoke for - UKIP's Mr Hughes unquestionably came out worst on both counts.

Add that to the 'subjective' sense of certain listeners that Paul Lewis's tone was unusually hostile to the UKIP spokesman, and you might - just might - have an argument the BBC will struggle to deal with.

Just one problem though: The BBC's online complaints form has a character limit. That makes explaining all of this and adding all the evidence frankly impossible.

There's a fly in my ointment though - actually a whopping great bluebottle.

Radio 4's excellent The Human Zoo, with Michael Blastland, did an election special a few weeks back. It examined how rational people really are, and how all manner of unconscious biases can make us impervious to reason yet prone to being influenced by all manner of non-logical things.

One of the programme's points was that people are staggeringly capable of ignoring or dismissing any stats they don't want to agree with - however watertight those stats may be.

And, worse, what might influence people where statistics fail are...anecdotes. People respond to anecdotes much more than they respond to statistics (if they don't like what those statistics are telling them).

So maybe it's better after all to stick with saying: "Paul Lewis is usually a credit to the BBC, but even he's not immune to BBC group-think, as shown by his much more hostile treatment of UKIP today. His interview with Mark Hughes proves the BBC are biased to the core against UKIP."

Plus, that would have made for a much shorter post.
Posted by Craig at 18:50