UKIP often complains that the BBC focuses on its scandal-hit election candidates whilst ignoring or downplaying those from other parties. Some Conservative supporters also seem to feel the same way, believing that Labour miscreants get it much easier from the BBC.

I was put in mind of this by a comment tonight at Biased BBC:

I Can See Clearly Now
April 24, 2015 at 7:54 pm
Not on The Six O’Clock News
Labour has suspended one of its General Election candidates…
Sumon Hoque… denied five breaches of the Road Traffic Act, including driving without a licence and being over the legal drink-driving limit.


Well, it may not have been on The Six O'Clock News but, a Google search reveals that there is a short (and I do mean short) article about it on the BBC News website.

The curious thing, however, is that it's rather hard to track down.

It's not on the BBC News home page.

...or, rather surprisingly, even on their extraordinarily busy (and, you'd imagine, comprehensive) election 'Live blog'...

...(and, yes, I've scrolled through the whole thing to check and, yes, the UKIP sausage roll guy is there - inevitably).

You will, however, find that article about the suspended Labour candidate on the BBC's Scotland page.

So, for admirers of the concept of 'watertight oversight', yes, they may be downplaying it but the BBC has reported it.

As the Texan guy from The Simpsons might put it: 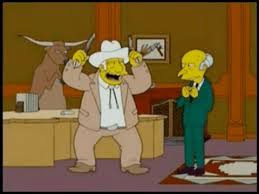 [Please imagine me as Mr Burns in that picture.]
Posted by Craig at 20:59