One for Nigel Farage to keep note of... 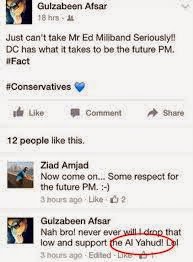 This exchange at Biased-BBC needs sharing:


AsISeeIt
April 27, 2015 at 12:32 pm
A Conservative local election candidate who said she could never support “the Jew” Ed Miliband has been suspended.
http://www.bbc.co.uk/news/election-2015-england-32482560
Nasty, nasty, xenophobic Tories!!!!!
Blimey, they’re getting as bad as the UKIP – I bet this was some typical stuffy old ex-colonel from the shires in a blazer…
‘Gulzabeen Afsar, a council candidate in Derby, made the comment on Facebook. In a post, she said: “Just can’t take Mr Ed Miliband seriously!” and later said “Never ever will I drop that low and support the Al Yahud!”. Al Yahud is Arabic for “the Jew”.’


Roland Deschain
April 27, 2015 at 1:15 pm
Strange. I read about that story yesterday, yet it seems that only now has it made it to the BBC website. I say “seems” because had the link not been provided above, I’d still be blissfully unaware it was on the BBC as it isn’t given any link on the main news or indeed election pages.
Now had it been a UKIP candidate, we all know things would have been a lot different.


Here, to prove Roland Deschain's point, are screengrabs of the BBC News website homepage and the election page, taken (by me) a couple of hours or so after he made that comment: 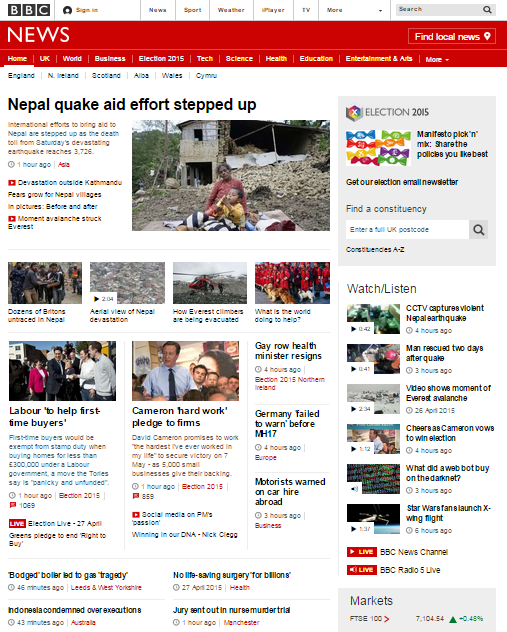 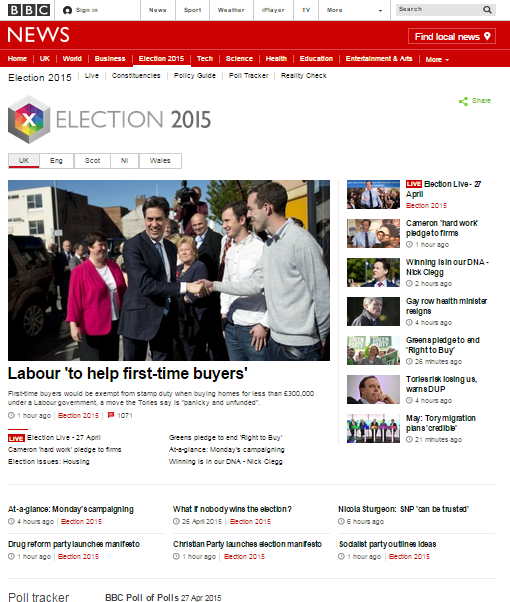 As you can see (if you look closely enough), that story of Conservative councillor Gulzabeen Afsar making what sounds for all the world like an anti-Semitic remark doesn't feature on either of the BBC's main online news portals reporting the general election. You will only find it if you click on the 'England' sub-section of the General Election page.

The BBC certainly seems to be downplaying this story, doesn't it?

Is it because, as Nigel Farage says, the BBC (and others) tends to be much more interested in reporting such stories if they involve UKIP, and tends to gave the other parties a much easier ride (or ignore them)?

Or given that the BBC isn't usually particularly shy about reporting racism when it comes to the Tories either, could it be that highlighting a story about a Muslim councillor making an anti-Jewish crack might not be good (in the BBC's eyes) for 'community cohesion'? Could that be the reason why they aren't giving the story as much attention as you would normally expect them to do?

Given that stories about sausage rolls and 'breaking Godwin's Law' during an election hustings can make the main BBC online headlines, why isn't this story considered important enough to do so? Why is it being relegated to the online equivalent of the inside pages (somewhere around page 14!)?